For three days now I’ve been heavily immersed in magical poetry. As the nondualist that I’ve been, so to speak at least officially since 1984, this is not something that surprises me, as this particular interest in poetry, let’s just call it my personal sonic resonating flow, has had an even longer streak, at least since I was 7. That’s when I made an important decision:

I was going to be a poet.

Why on earth, some may ask, and did it happen? Firstly, good question, secondly, hell yes.

Let’s take the first one: All that which we are is the sum of not only genetic inheritance, but also what we think our parents did or did not do to us, what they owed us, what they gave us, how they fucked us up, and how they loved us or hated us (my parents are both dead, hence the past tense).

Back in the day, before I decided to liberate my attention from investing too much energy into speculating about mother and father, I was very impressed one fine morning when both my parents were all over me, kissing me vigorously, calling me a genius and I can’t remember what else falling into the category of the awesome.

I think I was 7, or thereabout. I did some drawings and then suddenly I had the urge to accompany my drawings with a text. I had a book of Romantic poetry around. I looked up some words – all rhymes – and got it all down on paper. My mother looked over my shoulder and asked me in an excited tone: ‘Did you do that?’ I said ‘yes’, believing that she was referring to my drawing.

Alas she wasn’t, I was to find out, when she rushed out of the room, and called father. He also looked at my word concoction, not my image, called me a genius, and that was that. I seem to remember my face, quite clearly, my mouth wide open, and ready to object: ‘Err, wait, there seems to be some misunderstanding here. I only did the drawing, not the poem.’ But how do you go against your parents who were dancing already, calling you names, and praising themselves for their ability to create a prodigy? I mean, seriously. You just can’t ruin your parents’ experience of having their high expectations come true. They didn’t even have to wait more than 7 years.

So I said nothing. I let them believe that I was a genius poet, and that was that.

But this incident kept nagging me. I felt like a fraud. I felt like I was coerced into lying. This kept nagging me so much, that I have since had to go through I don’t know how many universities, all the way, and score ALL the highest degrees for basically the same interest: Poetry.

I ended up writing books and dissertations about it; I think of my cartomantic work as poetry, and I even wrote 2 collections of prose poems that only some mathematicians really got the full blast of, as my poems insisted on dealing quite heavily with what in math is called complex analysis, or stuff about infinity and the so-called real numbers. To this day, number nerds send me private messages to tell me how much this poetry changed them. Go figure. I just say thank you, and then think of my father. He was a mathematician before he went cold, dead and buried not long after the celebrating episode above.

Let’s take the second consideration. Although I have just said that I ended up a poet of sorts, I’m still not sure as yet about what a poet is. Not until I think about this relation: Poetry equals magic and magic equals poetry.

When I think of this, I know what poetry means.

Let me give an example. I like to initiate my series of courses in Cards and Magic, each featuring a singular topic, with asking students to find a dead poet to serve them as a ghost companion in their work with the cards. If anybody can help a diviner with sharp and penetrating insights, then it has got to be a poet.

I begin all my cartomantic classes and other with such games of find and seek: Not the holy grail – I leave that to my friend, Andrei Codrescu – but death. After all, not only are the best poets mad by definition, but they are heavily invested in death.

In some spiritual traditions there’s this saying going on: ‘Only the dead speak the truth.’ So here’s my logic: Poets are mad, because they dare to speak the truth, so they are already kind of dead. Just look at history. When was there ever a time when the dominant powers did something nice to truth, like elevate it to power and high status? No such chance. Truth has one fate only: It tends to die a horrible death – our culture has decided. Our culture has also dictated: If you’re mad enough to speak the truth before you’re nine feet under, you must be a poet. Being a poet and speaking the truth amounts to the same thing, sooner or later: Dirt over your chest and a few amens at your grave.

Be that as it may

While thinking about how I use dead poets all the time, I found myself immersed into finishing an academic essay on nature poet Gary Snyder and his shamanic beat. The paper was sent to the reviewers at 00.00 on the clock.

Today I also had to prepare for oral exams this week. One of the projects is about William Blake, another about oracular literature from the time the Romans hit the Druids in England, and the third about the mythopoeic idea of the triple goddess in contemporary liturgy.

As I was imparting some wisdom of my own in the form of giving examples of what to make of cards and dead poets, I found an interesting post that popped into my space on literary witches, a comic by Horan and Kataiskala referencing female poets.

Synchronous events such as these make me grasp the definition of ‘poet’ by way of observing how words jump in and out of the magical flow of life. Magic is our constant. What poets do is tap into this flow; stick their heads into it, and then shout back at us: ‘Hey, heed attention. You’re not dead yet. What do you spend your time on? I’m seeing that you’re not here, in the flow. I’m seeing that you’re wasting your time.’

‘What would happen if I stopped wasting my time?’ 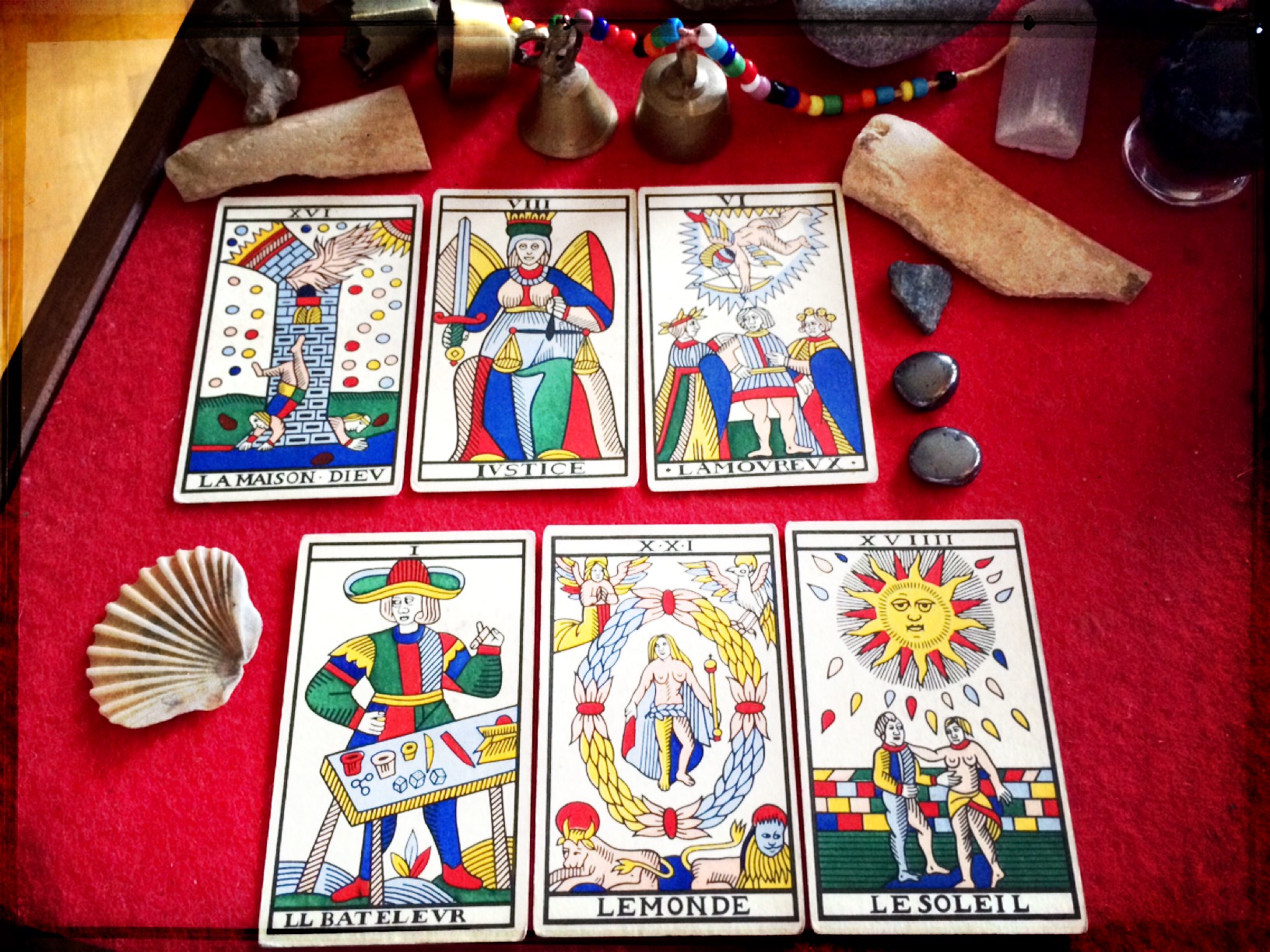 I could answer the cards above with these ideas: I’m wasting my time with playing judge for the ones who are always on the fence, vacillating and unable to deliberate on the consequences of the calamity that brought their houses down.

If I stopped wasting my time with the ones who are forever indecisive, I’d experience an uplifting show of unique magic that I could then share with the ones whose vision is not impaired or obstructed by ambivalence.

Try reading your own cards, perhaps with a poet in mind. Here is a dead one I’ve conjured to help me out with my own reading: Wislawa Szymborska.

These lines from Dreams strike a magical chord, very apt to this flow:

we light dark tunnels with our eyes,

we wax eloquent in unknown tongues,

talking not with just anyone, but with the dead.

Stay in the loop on cartomantic via Aradia Academy’s newsletter.

For a personal take on the poetic, check out my book, Being Besides Myself (no math in this one…)

2 thoughts on “THE MYTHOPOETIC MAGIC FLOW”