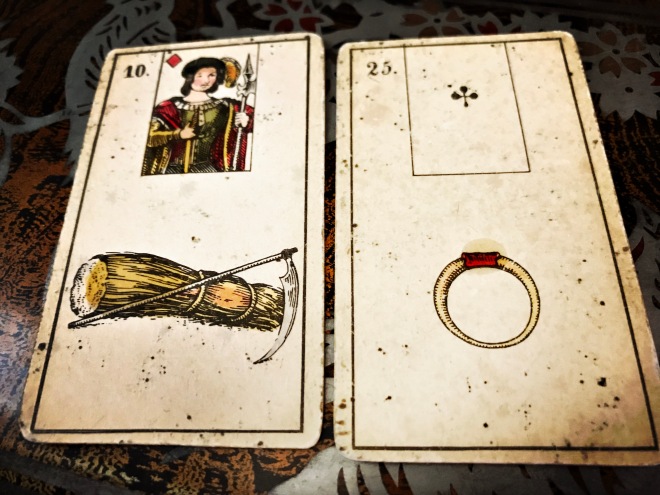 As a teacher of visual text (both in the academic context of art history and in the context of divination and fortunetelling), there’s one principle that I hammer on: The principle of connection.

When we’re presented with an image, it’s often not enough to identify what’s happening. For the experience that makes an impact, what we need is to connect what’s happening to an emotional or a rational response, or both, depending on our immediate context for viewing.

Whenever we connect the image to the emotion that we associate with the image, or the image to the decoding nerve if we’re with a detective kind of an investigation, what we’re doing is create a story behind the image.

It’s for this reason that I always insist on considering the cards on the table as a possibility to connect the visual narrative frames with a story behind the frames.

In the context of connecting, however, we never simply just go: ‘the Ring means marriage,’ and the Scythe means ‘ending’, as there’s always a story behind the set of the images we’re looking at. And it’s not always what you think it is, if you only operate with the surface level of things.

In the mainstream Lenormand world, it has been decided that ‘card combination’ is the thing, the backbone for divining with the Lenormand cards. Fair enough, but I wonder to what extent what is taken at surface level, for instance the idea that the combination Scythe + Ring means the end of the marriage, can also be thought of as the principle behind crafting a story behind the image-combination.

Those familiar with my work and extensive writing on the Lenormand cards (on this blog platform alone over a hundred solid essays) will know already about my disdain for set phrasing in any form it may be presented.

I often say that cards enable us to simplify things, and for many the Lenormand deck has become a simplifier par excellence. But I think of what Einstein used to say, namely that a scientist should make things as simple as possible, but not any simpler.

I think of the implications of ‘not any simpler’ for divination. Simplifying a situation to the surface level is one thing. Crafting a story behind the image is another thing, as it forces us to think of cards and card combinations in dynamic ways that bypass any list of meanings whatsoever.

My own methodical approach has been to prioritize the function of a cultural precept over its symbolic counterpart, having an eye for ‘not any simpler.’

In a given context if the Scythe + Ring connects to emotion, then we can say that the story behind this combination is actually one of relief, as normally, people get a divorce because they want to, not because they have a fantasy about the value of the pain of having their relationship severed. Statistically speaking the relief situation is much more predominant than the one in which the end of the marriage is a thing of sadness, and hence these days, empowering. Because… the vulnerable is in vogue.

Yet, in having internalized at surface level that the Scythe + Ring means the end of the marriage, the funny thing that happens is that, more often than not, the ‘meaning’ of this card combination is projected as a lamentable situation, even when it can be as plain as daylight that there’s no such thing as ‘lamentable’. What interests me here in my observation of this practice is just how such a projection can be deemed efficient, in the process assuming also that helping with coping is what’s needed. What if what the diviner needs instead is pop the champagne for the sitter, and celebrate?

From my own practice, I can testify that whenever I had to pass judgment on the Scythe + Ring situation in a question of relationship, there was a lot more to gain by pointing to the relief factor, rather than sympathize with what I would assume is a pain in the neck of the other.

In my cartomancy teachings I start with a line of basic questions: What goes into crafting a story that’s free of projection? How do we make it as simple as possible, but not any simpler? When we say that we’re free of symbolism, how do we actually demonstrate that we are, if that’s the aim, that is, to be free of symbolism? When we call our practice of reading cards intuitive or based on literalism, or on what we see is the case, do we also start with identifying what is precisely not the case?

I could continue, but I’ll stop here. Some 300 students have taken my Lenormand Foundation Course to date. I’m teaching it again, because there’s still people out there who might like to learn the story of ‘not any simpler’, and how to deliver a message with a nuanced measure of elegance and precision.

Stay in the loop for cartomantic courses at Aradia Academy.

One thought on “THE STORY BEHIND THE IMAGE”