I’m looking at an old postcard in my collection. I’ve recently used it in what became a useful post for many on how to boost your mojo through patience.

As this postcard is still on my table, I look at the tiny writing in the top right corner: ‘In 5 seconds’, it says.

I look at my cards: Queen of Spades, 3 Hearts, Queen of Clubs.

‘One too many here. Off with the third’, I think to myself, and look at the postcard again.

Hells bells. That didn’t take me 5 seconds. That took me a fraction of a second. 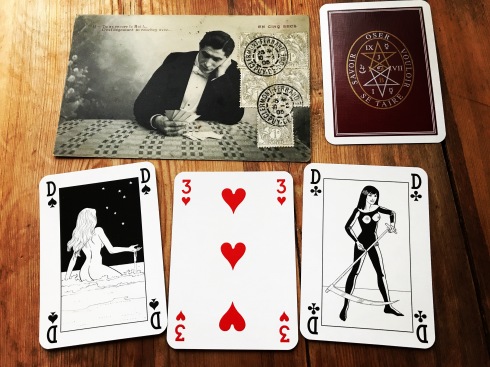 This reminds me of my ambition when I started making public my teachings about reading cards:

I ‘arrived’ on the international cartomantic scene at the time when people were talking a lot about the cards, but few were actually reading the cards.

At least that was my impression.

Fascinating and inspiring talks, but no sharp cuts. Why not?

I instantly set out on a mission: To demonstrate how you can read anything to precision in just a few seconds. That’s how Taroflexions started.

What I enjoy the most about reading cards is in fact this very challenge: To look at cards on the table, and not only put two and two together very fast, but also formulate the most elegant sentence that you can possibly can come up with that encapsulates the essential in what you see.

Little did I know at the time about French postcards from 1905 that have predated my intention. ‘In 5 seconds…’ How liberating to know that we’re never either too clever or too original.

Meanwhile people were mesmerized: ‘Whoa,’ they kept telling me, ‘how do you do that?’

Thank you for asking me that, folks, as answering this question contributed to my ditching an entire academic career so that I can become a famous fortuneteller.

Let us now laugh a little, before I move on. I love to laugh.

As I was telling people that my secret weapon is to just read the damn cards, I swear I wasn’t lying.

I didn’t even want to put it on account of my dubious ethnicity (part Romanian, part Jewish, part Greek, part Vallach, part Vampire, part ‘I won’t even…’ You get the picture. I hold Danish citizenship).

But reading the damn cards has something in common with tradition, just not the one you may think of. It’s rather more aligned with this indignation:

‘It’s not even your own bloody culture!’

That would be the Samurai culture.

Oy veh, can you imagine the confusion?

A Romanian fortuneteller who swears she can channel the meanest Samurai that ever lived? Not only that but also that monk who used to face a wall for nine years, Bodhidharma, who, by the way, is credited to have invented kung fu?

So here’s mine, just as I like it: The weird and the odd one. The one that never touched my blood, the one that has nothing to do with cries for separation: This nation and that nation, my skirt and your hat, your Odin and my Ishtar.

Back to the Samurai. I could write a whole book about the art of fencing. Suffice to say that there’s a school in the Japanese samurai tradition that’s associated with the name of ‘The Sword of No-Abiding’.

The truncated version is this: You’re a master, and can avoid dying from another sword and in your own bed, if you can so master your mental swordsmanship that you never even have to draw the blade once in your entire life.

The opponent only has to glance at you once, before he runs away screaming. How very excellent. How is that for a Zen paradox? It’s a good one.

One of the countless representations of this fascinating school is in popular culture. Film, to be more exact.

I watch a lot of those, in translation, alas.

I watch samurai films every night, and on occasion also in the morning with my coffee. Like today, for instance.

I don’t even care if the films are good or bad – though I prefer those from the 60s.

What interests me is the sword and the silk. The swooshing of the silk against the blade… I possess both, silk and swords, but not of the period.

Now that I’m at it, making this writing public, let me just say that if anyone out there reading this needs to make a special gift, you can think of my desire – well, beyond desire, as I have none – for an authentic samurai sword and an authentic silk kimono. My lineage of so-called choice would love to see me don such things. And as I have learnt the art of bowing, I can grace you with one.

Now, I have many favorite Japanese and Chinese actors, but I find Raizô Ichikawa intriguing. He knew how to play ‘faces’ and ‘masks’. A sublime actor who died at 37. Oh, the loss…

But let me link all this talk to cartomancy.

In the film Ken Ki from 1965, (Diabolic Sword) Hanpei (played by Raizô Ichikawa), an orphan who is terribly mobbed, becomes a florist at the court.

Once in the woods to collect soil for his flowers, he meets a Ronin, an unattached Samurai practicing his art. He is amazed at the man’s precision to cut a butterfly into three parts in one move.

He asks: ‘What is this sword style, sir, and how can I master it?’

‘It’s very simple. Quickly draw your sword, cut, and put it back. That’s all.’

Hanpei is most impressed but also discouraged. He can claim no training at all in any swordsmanship.

The Samurai explains: ‘There’s a big difference between kenjitsu and iai (fast draw). In kenjitsu there are a lot of untrue techniques behind it. But in lai there’s only one truth: draw your sword, cut, and put it back. That all. If you want to master it you have to see it with your own eyes. I won’t teach you. Learn with your eyes, that’s the essential thing.’

The next thing that happens is Hanpei’s dedication. He goes to the woods every day to watch the master practice. After one year, the Samurai says to him:

Hanpei is incredulous. He never touched a sword yet.

‘Yes, master,’ he says, I’ve now seen your technique and it’s beautiful: Draw, cut, and sheathe. But that’s all’.

He gives Hanpei his sword. He is happy to have passed on his teaching before he died.

Now Hanpei is the holder of the style of ‘draw, cut, and sheathe’. He honors it to the end.

How do you read your cards like the Devil, in 5 seconds flat?

Draw, cut it to one line, and put the cards back into their pouch.

Again, draw, cut it as fast as you can to the essentials – you have been practicing looking at the cards for one year – and then put them back into their pouch.

Watch the masters. Whoever you fancy is your master. It doesn’t matter who, because they can’t teach you what they do.

But if they’re free of all the ‘untrue techniques behind’, you can trust them to pass on to you something very special.

But you still have to do it. Every day. Watch the cards. Patiently. You don’t have to kill it immediately.

You can try, but don’t be so certain of your victory. There’s always a meaner fortuneteller out there who can kill it much better than you do. What of your confidence then?

Enjoy the equinox. The sun’s path cutting the celestial equator.

Isn’t all this cutting just perfect?

Stay in the loop for cartomantic courses.

For a similar take and various martial arts perspectives, have a look at my book, What is Not: Marseille Tarot à la Carte, or enjoy the book, 21+1: The Fortune-Teller’s Rules: Read like the Devil Manifestos, both from EyeCorner Press.