Sometimes you put some cards down for a serious session. You summon the Council of 13. You get killer cards on the table. And then you go:

The Star is above, the Wheel of change is below. No worries.

The money folks above – look at the round things they all hold – the celestials below. No worries.

The Devil is trying to catch something, but he’s looking in the wrong direction. No worries. The mirroring Force is holding the fort. No worries.

The Popess looks on from the margin. She’s the only one above worries. So, no worries.

I rather like this. No worries. Hanging may be central, but when the X marks the spot, there are good transactions on the diagonal lines. The Charioteer gets the World for his world. The Emperor gets the trumpet for his scepter.

Meanwhile, the Star above. Ah, let’s just leave it there, shall we?

Note on the cards:

These are the so-called Rosenwald Marseille Tarot, from ca. 1480. The deck is incomplete. The Fool is missing and so are all the 10s. No Queen of Batons either. Historians speculate that in addition to the 3 uncut sheets that have survived, there must have been a 4th. It makes sense. But what was on it? Pratesi thinks that since this is a Minchiate deck, the 4th sheet must contain all the remaining cards, all the way to 97. Dummett doesn’t think so. I’m with Dummett on this one, but then, as I’m not a historian I don’t worry about such things. I do think myself, however, that this is an ancestor of the Bolognese Tarocchino.

The deck in front of you is a facsimile of sheet 3 held in Washington DC. I have hand-colored it with real gold, hand-retouched it, and printed it on the fine Canson Infinity Arches Aquarelle Rag, 315 G. The back is a variation of a detail from Carolus Zoya Marseille Tarot. Eclectics we all are.

As the original Wheel of Fortune is rather disfigured beyond recognition, what you see here is my own reconstruction of it. I can’t draw jack shit, but this has never stopped me from producing some funky stuff – said others.

I let the Queen of Cups stand for the Fool. What I have in play here is the trumps plus the Queen of Coins. She snuck in behind  my back.

I’m not a reconstructor of old tarots – well, save for some occasions – but what I do is engage in this process as a way of enchanting for a specific thing. I like to recreate, or participate in reconstructing old tarots with view to determining and consolidating a spell. The Popess here is a spell, rather than just a new or original take on tarot reconstruction.

Enjoy the funkiness, and don’t forget: If your lucky star is big, then just thank it a million. 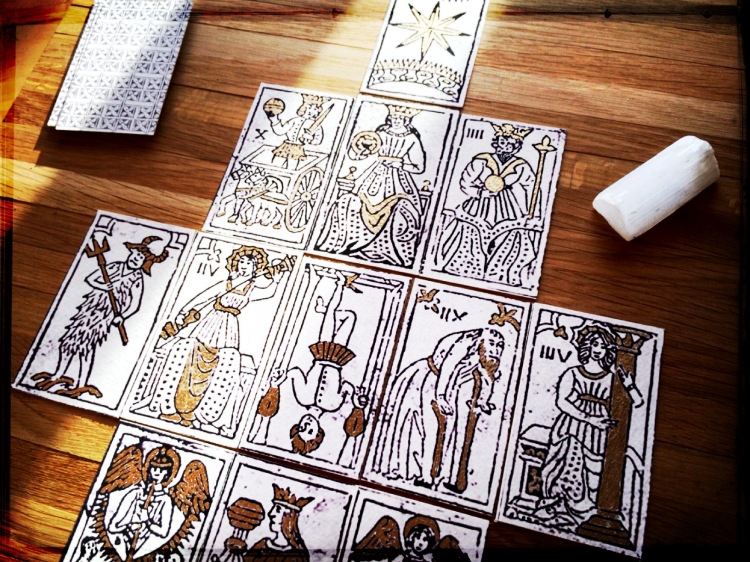 The cards are licensed, courtesy of the museum and of Iolon, who gave me permission to do whatever I fancy. Thank you to him. The first protoype is kept in weaker lines on purpose, though the card of the Popess featured here is in full resolution, yet hand traced and colored by myself.

Stay in the loop for upcoming cartomantic activities.