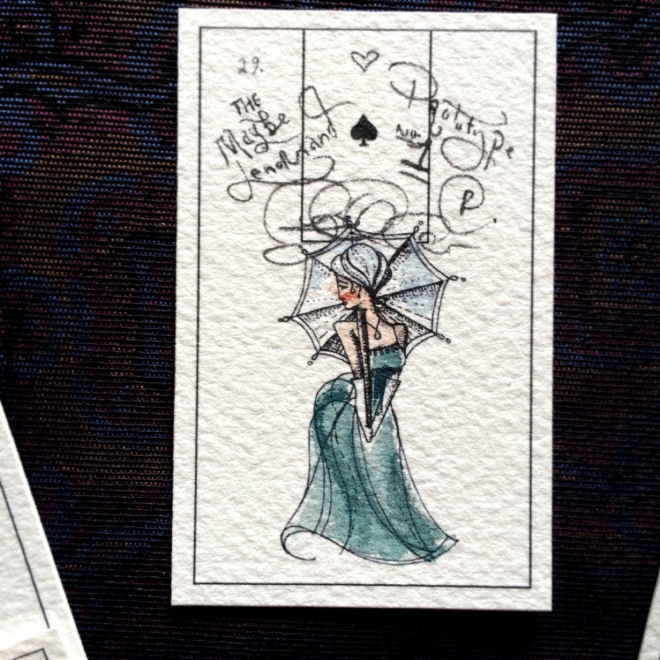 After waiting a long time for the postal and customs service to clear the ‘Art’, a most anticipated set of cards has finally landed. The Maybe Lenormand, designed by the inimitable Ryan Edward, lives up to its label. Art of the highest has actually hit me, and I am most high myself, just by looking at it. ‘Enjoy the cards’, Ryan said, ‘they were made especially for you, after all’.

I have been tutoring Ryan on reading cards for some years now, and I can safely say that he has proven to be one of my most tenacious students. We’ve been through all of them, ranging from playing cards to the Marseille Tarot, and a heavy load of Lenormand method, from the three-cards layout to the magic of the grand tableau. A brilliant student teaches you something, always, and then, when off he goes to create cards himself, which he then dedicates to you, you know that you can now retire: your days as a teacher have been made. 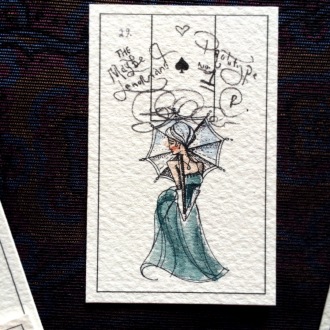 Ryan has been toiling with the making of a set of Lenormand cards – among others – and it’s clear that because he took his time on this one, the work has paid off. He has produced something close to perfection itself. The cards ooze the care he put into the whole process, and above all, his talent, and his understanding of the cards, both in a traditional context and as the cards fulfil a function in our modern setting. It’s exactly how all divinatory art should be, namely, make itself timelessly relevant.

Ryan’s cards are not only aesthetically pleasing, or beautiful to the point of swooning over them, but they also have a voice of their own. Just by looking at the card of the Garden, with the balloons lifting off from it, gives me a thrill of excitement. Ryan understands what is at stake in this card, beyond its conventional suggestion that this is all about public life, networking, or leisure, such as strolling in the park may be (well, still with view to having others watch you do it, nice Kaiser und Kirche 19th c. style). This card is about your relational self, but it is also about lifting off your spirits and making you aspire to ballooning vistas.

The Cross is dark and heavy, not cute, and not: ‘maybe this love is fated’ sort of thing. If this one befalls you, you will know what’s what. The Boat splashing the ink of the sea around reminds me simply of my days as a 9 year-old, when I would collect Chinese fountain pens with a gold tip, which had a way of rendering the blue like no other fountain pen around on the planet. I am in love with this color. As Ryan has explained, for my prototype (Number 1, yes, I need to repeat this, as my ego knows no margins right now) he used 4 different pre-mixed watercolors, which took a long time to get right. Sublime art takes time, indeed. 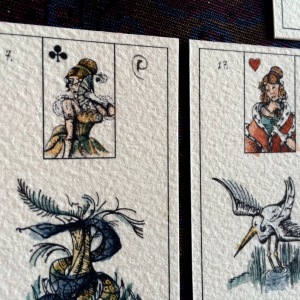 The court cards depicted in the small tableau insets are exquisite, and we can see Ryan’s hand at work as he put pen to paper in a confident way. We are here with a real pro, that’s clear. It took him 10 to 12 tracings to get the right weight of the lines on paper, and god only knows how many sleepless nights of dreaming up perfection. A nightmare.

What is more, there is a reason why this deck is called The Maybe Lenormand. After the traditional 36 cards, Ryan kept on going, designing the remaining cards that make up the full playing cards deck, minus the Jokers. The inspiration for these cards has been the Tironian Lenormand, and some other fortunetelling packs from the turn of the last century.

The result speaks for itself. I call this true dedication to one’s art and craft; discipline and resilience; a focused eye that goes somewhere, and an openness to listening to someone like me, who, where art is concerned, can only speak from the position of spectatorship. But I can sense the hard work that goes into such art, and I bow to it. I am truly in awe of this man’s work, and very humbled to be the recipient of it. This is one pack of cards that would make me want to write a whole Lenormand book. With such cards in hand, it would be very easy for me to simply just re-arrange in book form a few of my seminal posts on the Lenormand that have inspired a host of other readers, and voilà, a new voice may be born, encapsulating the maybe in Lenormand.

Meanwhile, as the tradition has it here, I must take this deck for a ride. What better place to start with than the grand tableau? So here’s a quick take on it (for the in-depth mechanics of the GT reading, follow my method here). 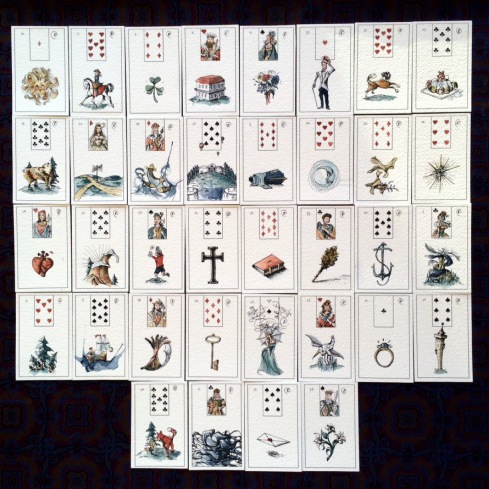 As I was marvelling at these cards since the minute I held them in my hand, one thought befell me, namely, that these cards constitute a beautiful book of changes. With this in mind, I proceeded to ask about the immediate changes in my life, some of which I anticipate, especially those related to work. The significator card for changes is the card of the Stork, so I mainly looked at that in tandem with the Woman, the other main significator. I didn’t look at the Anchor as such, the significator for work, as I didn’t want to reduce the reading to changes in work. So, the main focus was to be on changes in general. But as we will see below, the cards insisted on work, rather than changes in my love life or health, so I have anticipated my question rightly, with the cards cooperating.

As this tableau shows, there’s a lot on my mind, formally speaking, as suggested by the card of Woman in the middle of the last row of eight cards, as if gathering a lot of gravitas from the cards above. The fact that the Book is on top of my head doesn’t surprise me, as I read and write all the time. That’s what I get paid to do, both in my academic life and the life that I have carved for myself as a reader of cards.

The Bouquet above, mirroring the Letter below, suggests that there’ll be news about bookkeeping, or that I may have to dig the archives for my next topic (Coffin above the Book). In fact, the whole tone for the tableau is one of sudden, yet brilliant messaging, as testified by the first three cards (Sun, Rider, Clover). Ryan gave the Sun a pair of glasses. This makes me think that in the context of my question, the idea of using my eyes to read with is not too far off the idea of nailing yet another book.

The card of change itself, the Stork, is right next to the Woman, so it looks like I’m moving straight into making a deal with some institution (Woman, Stork, Ring, Tower). It’s not sure that the new deal will be a smooth one, as diagonally the Woman moves into the disciplinary Whip, and then on to some nerve wracking stress (Woman, Whip, Birds, Mice). As these days I’m lamenting having to waste a lot of my time and breath on bureaucratic hassle, I don’t look forward to a continuation of the same. But alas… My institute at the university has just fired a number of tenured professors, due to budget mismanagement, and now everyone is suffering the tensioned consequences. The place has become quite hollow. The corner cards taken clockwise indicate loss of energy, but also a continuation of the same (Sun, Mice, Tower, Tree). The card of the Tree in the lower left hand corner features the 7 hearts on it, indicating heartache. Indeed, right now at work folks have a lot of sympathy for the ones who have lost their jobs, regretting the general bureaucratic attitude of firing irresponsibly the ones who have not caused the imbalance in the budget.

If we look at the way the Woman knights to the card of the Anchor, the Anchor itself being flanked by the Snake and the Whip, we can only guess what kind of other hidden and dishonest agendas we are up against where work is concerned. Nasty business. The Cross making a direct diagonal to the Lily, in the inner carré of 8 cards surrounding the Woman, tells us that it’s going to be difficult to maintain integrity in a shifting environment that has quarrels at the top (Lily modified by Stork mirroring Whip). We don’t know what causes the aggression (Whip to Clouds in the 9-carré), but it looks like it’s an old key issue coming up (Cross, Key, Clouds).

The Woman’s Heart is in the Book, which suggests that the best strategy is to stick with the writerly vibes and (im)pulse (Woman intersects with the Heart in the Book). There is recognition of my bookish interests, but this only comes in the oblique way (Woman knights to Garden and Moon, with each of these two sitting on the Cross and the Whip respectively). Good book, inexistent press? The inner 4 cards at the center of the tableau read in the traditional diagonal cross tell us that while the public is interested in the book (Garden goes to Book), there is also dead silence around it (Coffin to Cross). My latest contribution to the world in book form has been my Marseille Tarot book published earlier this year, and although I have received a number of rave reviews on all social media, I haven’t done much to promote the book myself. In fact, I have been quite grateful for the word of mouth and fans who have been speaking kindly about it.

More could be said, but it’s clear that changes are coming, with a new deal in sight, which may hold some promise for good deliverance (the Star in its own house, the house of long-term relationships). The work line where we find the Anchor card intersects with the Woman in the Book, so one thing is certain: whatever change comes, it is likely to involve reading and writing.

Judging from the last 4 cards, while it’s not clear what strategies will be employed (Fox + Clouds) for all this writing that seems to weigh on my head, it looks like the topic will be a classic (Letter + Lilly).

I haven’t mentioned much the way the cards fall into the 36 houses, simply because I want to keep this fairly short. But I do want to refer to the fact that the Woman falls in the house of Woman, her own domicile. As this house is directly related to rewards (following the Master Method), I can only rejoice over my getting old, hopefully gracefully, enjoying the potential benefits of my work, hopefully also of some classic relevance.

I’ll take the suggestions in this tableau. In the context of Ryan’s exquisite deck, himself having achieved the difficult task of creating a modern classic, I think it’s a good idea to stick to the familiar. As the Woman intersects with the House in the Flowers, I’ll take this as a clear statement for this action: ‘say yes to changes, but make sure to elegantly anchor your work in what you know sparkles like a diamond.’

Note on the cards: The Maybe Lenormand, Prototype 1. Ryan Edward.