Today my sister has asked me to read the cards for her. She’s a reader of cards of heavy caliber, and I never really expect her to ask me this, but sometimes we have a bit of fun together, teasing each other’s methods and skills. Today was serious, though, judging by the worst kind of cursing that I’ve heard in a while. And believe me, you don’t want to be there when my sister curses. Once she cursed someone in Tel Aviv when we were just vacationing, and shit came down like there was no tomorrow. 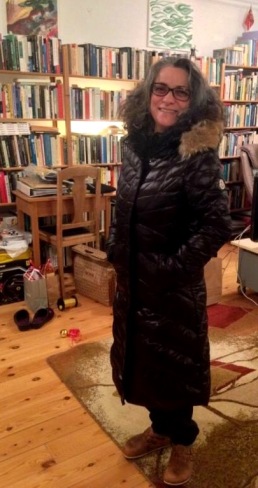 What happened to her is what happens to many. She got cheated on the internet. She wanted to give herself a nice holiday present in the form of a down jacket made my Moncler. She is not a stickler for brand names, but as Moncler uses the kind of down that actually does keep the body heat, unlike others, she thought she would go ahead and invest in one. She went to an outlet shop online and paid some 400$.

She got the jacket and got horrified. Fake, fake, fake. A good imitation, but fake nonetheless. Now, as my sister has a keen sense of justice, she just can’t live with this. She has been corresponding with the shop, and all seems well. But there’s this nagging thought. Although the shop promised to reimburse her on her return of the jacket, because they insist that the jacket is NOT fake, my sister is suspicious. She has actually done the checking of the code of the jacket and all that detective work that goes into uncovering lies, so now she has no incentive to believe anything that the shop says. Her worry is that she returns the jacket and will never see her money back. This is where I come into the picture.

She wanted to know what’s best, to keep the fake beast, and never be happy about knowing that you’ve been cheated, or return it and potentially never see your money again. The fact that she doesn’t care about the money must be factored in as a positive – she can actually buy the shit at full price if need be; lucky her.

I did a three-card reading for each of the situations:

For the first question she got these cards:

Temperance, The Charioteer, The World

For the second question she got:

The Wheel of Fortune, The Emperor, The Star 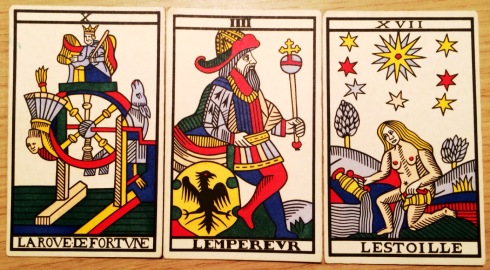 Seeing these cards side by side made me think of this: whichever way she goes, she will end up naked.

For the first scenario, I told her that I didn’t like the way the Charioteer was almost scoffing at Temperance, as if saying, ‘this is a done deal’. For all we can say about the World card, with all its fancy associations with realizations and good stuff, sometimes the World, being the last trump in the major arcana set, simply means ‘that’s it’.

I have to admit that I was totally put off by the Charioteer’s gesture – hand on hip – and confident attitude, already exhibited by the Hong Kong ‘Moncler’ jacket people. Given that my sister is quite perceptive, I let her draw her own conclusions here.

But the cursing kept pouring, so I continued.

I told her that if she kept the jacket she would have to make a conscious decision that this was a fortunate buy, after all. In other words, the Emperor side in her would have to turn the bad luck into good luck; convince herself that her purchase was an inspired one. This was the only way in which she could keep the jacket and enjoy it at the same time for what it was.

In the end, my sister decided to go with the Emperor, but not before swearing on her mother’s grave – and my mother’s too – that she was going to go to court with these people. First report them, and curse them the worst magical way she is capable of – lord have mercy on their soul – and then go the legal way.

Fuck me, and there I thought that I was the mean one in the family. I think I’m going to revise my position there before the New Year. It might just save me from making erroneous assumptions about myself and perhaps others in the future, if I knew exactly what I was in relation to my blood kin.

Happy New Year to all the readers of Taroflexions. I hope you enjoy the new revamping of the site, and a new link to the menu, anticipating my new book on the Marseille Tarot. Check it out for more of this stuff.

Thank you all for listening, and for engaging with these thoughts here so far.

May you all be happy and warm and in love with something dashing and full of vitality in 2015 – and, of course, may you never be cheated on the internet.

Note on the cards: Jean Noblet, 1650, as reconstructed by Jean-Claude Flornoy.