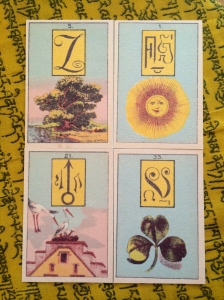 I have written about the so-called Tironian Lenormand cards before, in connection with a lovely gift from collector K. Frank Jensen. On that occasion I suggested, tongue-in-cheek, that these mysterious cards, featuring strange symbols in the place of where we otherwise find playing-card insets, are actually monograms.

Today I’ve played with these cards for a bit when something struck me. As also mentioned in my previous post about this, the symbols, mostly Kabbalistic, are also found in the seals that come from an old grimoir, translated into English from the German in 1916, called The Sixth and Seventh Books of Moses.

As with the grimoir tradition, these magical books are intended to serve as collections of recipes for the successful conjuration of spirits, both from above and below. The symbols are generally a mixture of both planetary and alphabetical glyphs.

To my knowledge, I haven’t seen anyone else making this connection before, so today I’ve experienced a twinge of excitement. People have been trying to locate a text to go with the Tironian Lenormand and that explains the meaning of the symbols on these cards, but no one has been successful. Occasionally one stumbles over people claiming that the meaning of these symbols are preserved in their family, and that they only intend to disclose them when they find it opportune, but I tend not to take such claims seriously. I prefer to speculate or offer a fairly intelligent guess, than to invent stories about cards that we cannot explain the historical way. So, here’s what I hadn’t considered at that time when I first talked about this deck, and which is the actual correspondence between some of the glyphs for these sigils and the images of the cards that mostly follow the Lenormand pattern.

Let’s have a brief look. First at the symbol that looks like the letter Z (for Jupiter) on the card called in the Lenormand pack, the Tree. The short-hand writing on the plate from the sixth book of Moses features this glyph twice. This is the first seal, and it deals with the finding of treasures that will surface all by themselves, if the conjuror takes the pains to bury the seal into the earth. The power of this seal is to make the treasure appear by full moon without the requirement of anyone’s presence.

If we look at the way the Tree itself branches out, we find a similarity in the lines. Symbolically, the two flat planes in the horizontal lines of the Z connected by a slanted vertical line may well indicate the very hermetic axiom of ‘as above so below.’ Conjure up the spirits from above, have them work with the spirits from below, and before you know it, a treasure will emerge from the belly of the earth. Besides, as Jupiter stands for expansion, we can easily see that connection mirrored in the branches. 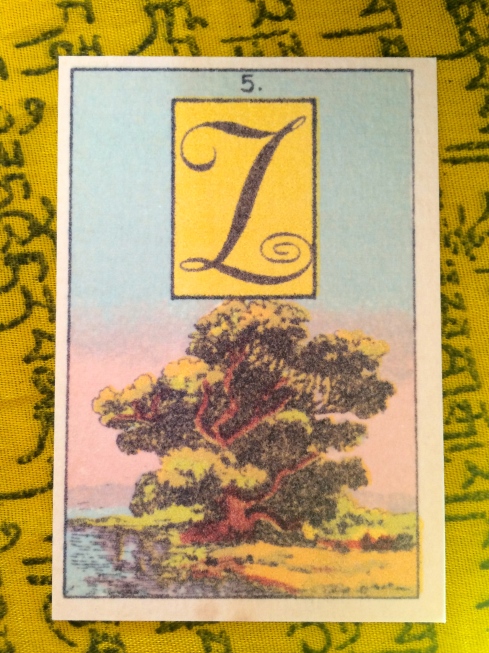 The second seal of Moses features some scribbling that resembles the ones on the card of the Sun. This seal is for carrying around. Its power manifests in the most fortunate form, and the book tells us that this is the reason why this seal is also called the ‘truest and highest seal of Fortune.’ On our card, we can almost see a door opening, with flashes of rays coming through it. 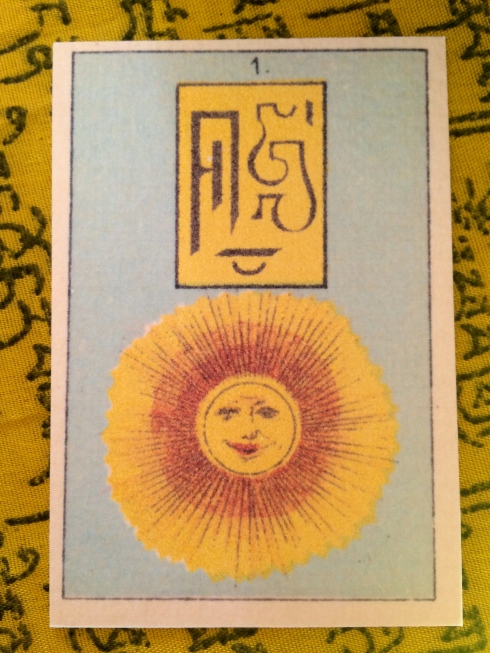 On the card of the Stork we find the fourth seal of Moses. Especially the arrow, the sign for Mars, is interesting to pay attention to, as it’s also featured twice on the plate. This seal is made to protect its wearer from all misery, ensuring great fortune instead. Now I’m thinking of yet another correspondence. In the Lenormand parlance, the Stork is associated with changes, yet when the Stork acts as a house (according to the Master Method), then it’s all about misery and sorrow. A nice coincidence then, to find the arrow protecting against misery associated with the Stork.

The final card that I want to use as an example is that of the Clover. Here we find mirrored the seventh seal of Moses. This seal also mirrors the first seal, in the sense that it also talks about the finding of treasures. Indeed, luck can be upon us, perhaps in a more concrete and immediate way, namely the Clover way in the Lenormand cards that associates the clover with instantaneous fortune or relief. Moses’ seventh seal, if placed directly upon the earth or more concretely on top of a mine, will reveal the exact location of the treasure. Instant gratification. Indeed, the very meaning of the Clover cards. 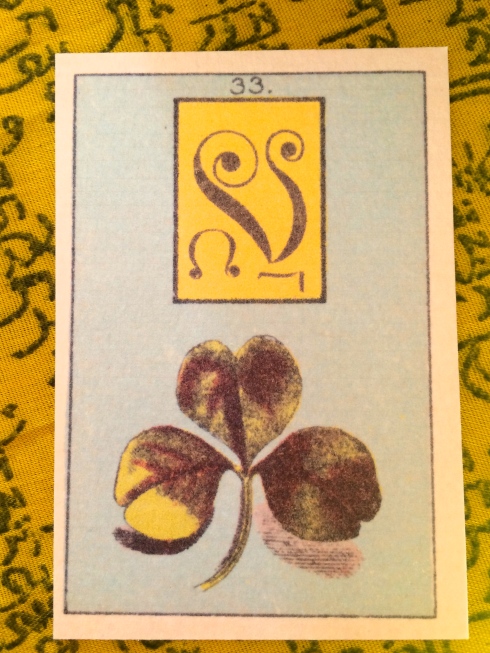 I could continue, but suffice it to say, we don’t always need to wait for others to tell us something about their precious family treasures and secrets. We can either do our own research, stumble the good way, or simply use our common sense where the work of interpreting the cards is concerned. Almost everything that we claim is original in cartomancy is actually not. The only original thing we can claim is the way in which we actually read the cards. At least that’s what I’ve been aiming for with Taroflexions. To give people a taste for how they can think for themselves while considering old systems of thoughts, if they are available.

As I said in my first post about this, perhaps I should write my own book about cards and magic. After all, this is my interest and specialty. 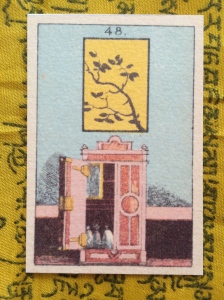 UPDATE: Since I got an interesting question after publishing this from my student Ryan Edward, pertaining to one of the cards that features a ‘weird’ sigil compared to the others on this pack of cards – as it doesn’t look anything like the others – let me upgrade here from the comment box the point I made, and which may have a degree of plausibility in the larger context:

First, here’s Ryan’s question: “The Safe card in this pack is still curious to me. All others are sigils and glyphs while the Safe, card no. 48, last in the pack, has a silhouette of a tree. Anything like this in the ole book of Moses?”

Ryan’s question is an excellent one. It made me think of the cherry tree, or the almond tree also standing for good fortune. There’s no ambiguity there, as far as I can see. Moreover, the symbol of Tu BeShvat in Israel is the almond tree blossom (and it very much looks like the Japanese cherry tree), so we’re still with that world thematically, the Kabbalist world, that is. Besides, the Archangel of Kether is Metatron, literally the almond flower. Graphically, of course, this sigil still makes no sense along the others. But I’ll think some more about it. Meanwhile, perhaps a connection may be found here:

Note on the deck: 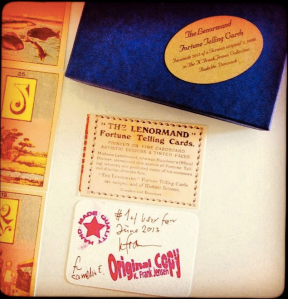 Facsimile of a German original c. 1880 in the K. Frank Jensen collection.