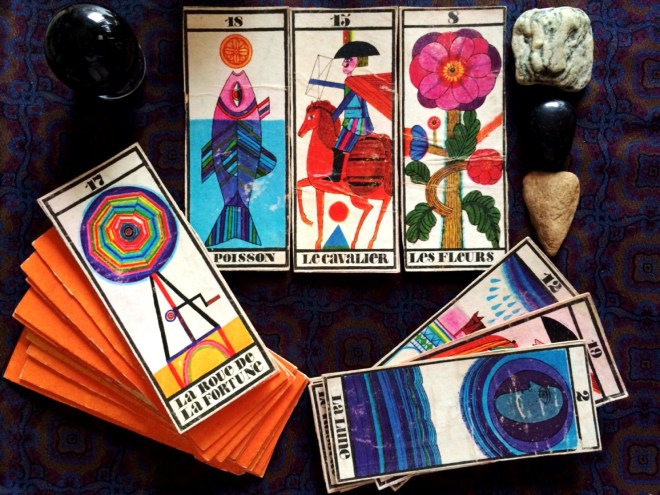 Although I have been writing about the so-called difference between reading cards of various provenance – Tarot is not the Lenormand cards, playing-cards are not oracle cards, as the claim goes – and although I am in agreement with the factual evidence – the tarot cards have different images on them than the Lenormand cards, and the same applies to playing-cards and oracles – what I am not in agreement with is the common view among contemporary card readers that the modes of reading these cards should differ drastically.

Having seen a few serious card readers in action, I have come to the following conclusion:

All forms of divination go back to one source, namely the reading of signs in all their forms of manifestation as omens, symbols, magical and power objects, or the written word.

Diving into the history of divination also discloses that the reading of signs follows one simple method based on pattern recognition.

What we call intuition is the spark that enables us to see how the visual material we are dealing with – and let us make it very clear that all divination is based on the way in which the visual material mediates between what we know and what we don’t know – is embodied in the sign.

What does this mean? This means that as soon as we have a picture representation of something, we recognize it as ‘doing’ something.

Based on what we see that the sign is doing, we tell a story.

These latter cards are based on a semantic relation that operates with keywords, the claim goes, as if the tarot cards don’t, I say.

What people postulate is generally true, if we talk about a literal or symbolic approach to the cards, but not true of the cards themselves.

If we decide that the keyword for the Ring card in the Lenormand set means marriage or a contract or going in a circle, we do so based on recognizing the ring as a cultural artefact invested with those particular symbolic meanings.

Based on this commonsensical evidence, it is thus nonsense to me to hear that we can use this very evidence as ‘argument’ for why we can see that the Lenormand cards are ‘clearly’ less symbolic than the other cards.

The tarot speaks in images while the Lenormand cards don’t? Ha.

Let us have a short moment of laughter here, while reminding people that not all slogan-like proclamations about the differences between the tarot and the Lenormand cards are either clever or have any real basis.

Sure, catchy phrases can be catchy, but are they all useful?

In the world of reading cards we should do ourselves the favor of reminding ourselves that all images have a mediatory and symbolic function to begin with.

If there is a difference then we find it at the level of representation, with cards going from figurative to stylized content, from kitsch to elegance, from historical to contemporary, and so on.

Before I go on to illustrate how ludicrous some claims are pertaining to the supposition that readers read cards differently, and how supposedly excruciatingly difficult it is to ‘transit’ from Tarot to the Lenormand cards – a good thing not everyone is into reading with playing-cards yet, as I can imagine the ensuing circus of transiting – I want to stress the fact that if one bothers to read a bit on tarot as a popular culture manifestation, as a cultural text per se, one would discover that what for the French is de rigueur is for most of the Anglo-speaking world invented tradition.

The card-world is now on the brink of exploding with neo-traditionalists, who, at least as far as I can observe, and without making obscene generalizations, have just not seen many cards yet.

And this in spite of Stuart Kaplan’s efforts to publish all things tarot, and standardizing the Waite-Smith tarot.

Every day a new opinion is expressed, these days mainly about how bad tarot is and how good the Lenormand cards are, and it is expected of us to embrace it wholly and uncritically.

Well, good luck to the enthusiasts.

I am fortunate enough to own a rather queer deck – queer not in the sense we speak of it now – which downright conflates tarot and the Lenormand. The cards have a strange history.

The idea was to cut out the images and then glue them on heavy carton according to a set of specifications.

A variation of this deck has also been made in 1971 by ‘Poster Prints’, Pennsylvania, under the title ‘French Fortune Telling Cards, created in association with Miss Brooke Alderson and the People of France’.

My friend, the collector K. Frank Jensen has several of these. My own Elle Tarot was bought from a Frenchman at a strange place. Here are a few pics from Frank’s collection. Frank doesn’t have it. He’s jealous.

About the popular dissemination of the tarot in a widely circulated medium we can make the following inference:

The Tarot as Lenormand as playing-cards as oracle cards is for the French a very broad concept.

Tarot is primarily for fortunetelling, the French have always believed, rather than psychology, astrology, or other esoteric stuff.

As a counter to that, standard tarot readings within the Anglo-American community owe much to the influence of the Golden Dawn Hermetic order.

But the Golden Dawn is not the whole world.

So passing judgment on what we all do with the tarot based on what the occultists of the last turn of the century did is to stretch it just a bit.

Accusing all Tarotists of being ‘symbolic’ when they could be ‘literal’ and direct is a rather poor attempt at advancing one’s own agenda in the world.

Here, I wish I could say that the voice of people such as Joeanne Mitchell (MamaWhodun) could be heard louder from across the Atlantic. She is one of the African-Americans who can read with all cards like few I know, but alas, due to various circus circumstances she has elected to lay low.

Basically there’s at least one truth we can all agree on, namely, that the function of all cards is to create stories.

The cards also have different histories, which means that if we read differently it’s because we address the context differently.

How the cards tell a story can indeed also be the domain of a reader.

One’s preference to see one’s mother in the Tarot or Lenormand cards of the Empress, the Snake, the Bear, or the Stork, is pretty much the result of what kind of symbolism we impose on the cards.

There is nothing literal about that.

How strong a reader is, what kind of connections the reader can make across oral tradition, symbolic and cultural conventions, and what kind of space the reader can create for the one she is reading for, so that not all washes down the alley of the reader’s own ego is where the real power resides.

A good reading does not consist in merely expressing opinions and pretending to know everything between heaven and earth. A good reading consists of sharing what the cards have to say.

Nothing more, nothing less.

So, just for fun, I asked my own Elle Tarot, which has both tarot cards and Lenormand cards co-exist side-by-side without any qualms, the following question?

What is a strong and useful reading?

I used for this the standard square of 9, a preferred layout in all classical divination settings, also to emphasize once more that, at least for me, there is no difference between the cards. The difference is only in our approaches to cards and our moral standard codes.

Once more the cards have a good answer. One I can anticipate, as I have formed my own codes of honouring the cards through experience as to what makes a good reading, and one which surprises.

The first horizontal line tells me that a good reading is definitely not one that has the money in sight, but the one that allows for chance to play its hand (Fish, Coffin, Wheel of Fortune).

The middle row tells that a useful reading moves towards an alliance made in good faith and that warms (Ship, Ring, Sun).

The bottom row tells me that a strong reading is one that follows a natural and open communicative course (Lion, Bird, Flowers).

The diagonal lines tell me that a strong and useful reading is one that offers a generous cup, free of hidden agendas (Fish, Ring, Flowers, modified by Sun).

They also tell me that a strong and useful reading spontaneously creates a bond with that part of us that is not merely talkative but rather raw and dreamy in its expression (Wheel of Fortune, Ring, Lion, modified by Ship).

In other words, a strong and useful reading is the reading that has the heart in the right place.

Let us now note a few similarities between the tarot cards and the Lenormand cards. For once, what we’ve got here is mostly Lenormand cards, albeit having a different numbering than what we have on a standard deck.

A look at the Coffin, however, discloses that this card is closely related to the card of the Hermit in the Visconti-Sforza tarot. The same hour-glass marks the passing of time here as the one the Hermit bears. 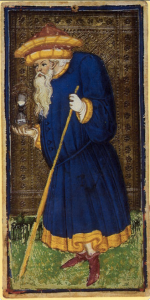 The Ring is beautifully related to the Ace of Cups in the Visconti tarot. A little heart at the core of it all reminds us of where to put our mouths. 6 out of 9 cards deal with round shapes. The Wheel of Fortune times six. Things go round and round. The Rider brings news. If we are experiencing bad card-reading practices now, we can also trust that the good times will roll again.

The pyramid with a glowing sun above reminds us of the esoteric wisdom that says that card-reading is not for everyone.

The Bird enforces this, and reminds us of what we associate divination with, namely, the language of the birds disclosing grand secrets.

But who can hear this language? Who can understand it? Rachel Pollack writes beautifully about this, and so does Enrique Enriquez.

The Fish going for the big coin, a major stylization of all material resources found on all tarot cards, tells us that putting our money in the time machine gets us not to calculations but to the experience of all things unexpected. Who’s to say what’s under the surface of the sea, or what changes are on their way, and who turns the wheel of change? 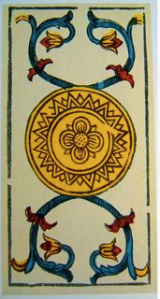 We could continue, but let us rest here, with emphasizing our point even more strongly:

Reading cards is not about who is to be master, or who is the loudest in town, but rather about who can allow the cards, WHICHEVER CARDS, to have their say in it.

Reading cards is also about just looking at the cards, rather than stating uninspired opinions about how cards can still mean something if we dispense with looking at them, supposedly because, lo and behold, we have their literal meaning that never comes out of symbolic considerations – such dangerous nonsense. Reading cards is about saying yes to what we see, not to what we imagine we see, and least of all to what we imagine we see in our own image.

Good luck to all beginners out there, who are trying to wade their way through what the sheep and the goats have to say.

For more readings on the difference between tarot and the Lenormand cards see my posts Lenormand vs. Tarot, Tarotizing Fortunetelling, No Difference and Lenormand Semantics.