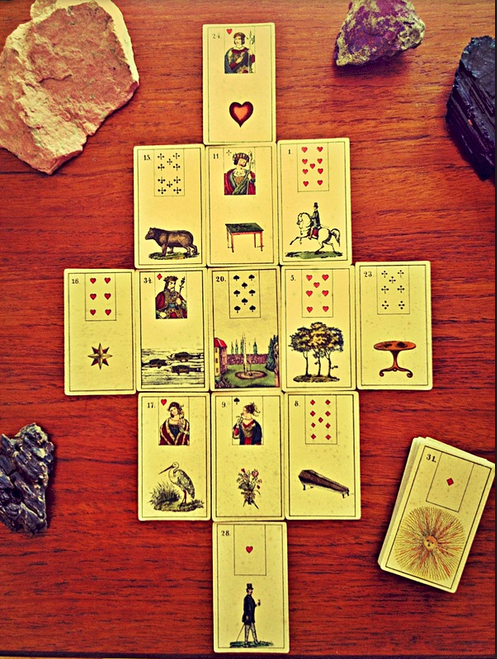 Questions that elicit a yes/no answer have always been popular in any card reading setting – from reading with playing-cards to reading with oracle or tarot cards. I have written a few posts about this previously, but as I’m getting inquires about how we can gather more information on a topic that could basically be answered by a simple throw of dice – ‘will I get married?’ ‘yes’ – ‘with him? – ‘no’ – here are two spreads that I use often: the first one I call the Council of 13.

This is not a spread I invented myself, as these things have been around for a while, but I call it that myself, as I think it’s very good for yes/no types of question. (For more ample intro to the mechanics of this spread read my post here).

The second is a complement to the Council, although it can also be used individually. This one is called the Method of 13, a classical spread in cartomancy. Colette Silvestre uses la méthode des treize in almost all her books, whether on Lenormand, the Grand Jeu de Lenormand, or Tarot. The layout for each of these spreads is different, as you can see below.

The question came from a schoolteacher about her project of writing a classroom textbook. It was phrased in the following way:

Should I finalize my textbook in my summer vacation?

For the Council of 13, we use the following pattern, with reading the cards in clusters of three at a time, first the inner cross and the outer cards, then the X, and then the outer ‘curbs’: 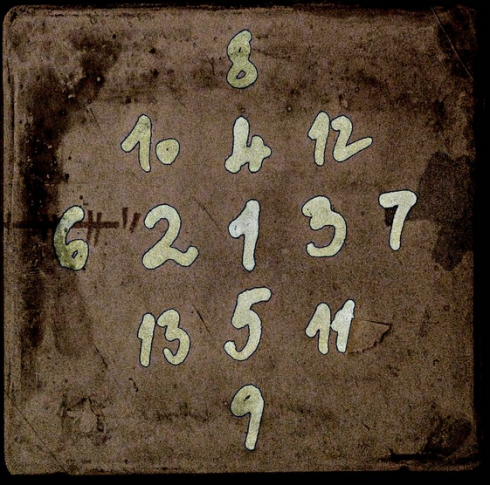 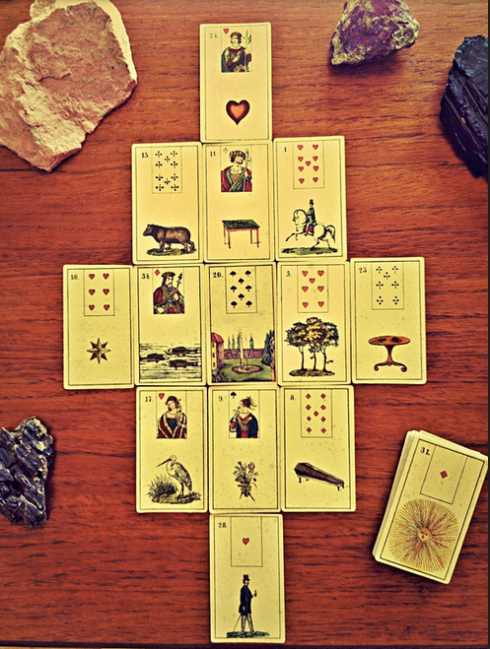 Good project related to money (Fish Garden Tree). A gentle correction of the public way (Whip Flowers à Garden). The inspiration is good and so is the gathering of material, albeit exhaustive. A possible waste of time is on the horizon (Star Garden Mouse). From the circle of friends, a man in love says yes (Heart Garden Man).

Familial gifts are transmitted (Bear Coffin; in traditional cartomancy if the Stork is in the spread, the gifts come from the mother or the mother’s side (Bear Stork Coffin); if the Ring is in sight, the gift comes from the father’s side).

So here we say that the project is related to the transmission of ideas that come from the mother’s lineage (Bear Star Stork; Bear knights to Tree and Stork knights to Tree, emphasizing the family tree). The project’s message will change the face of the public (Rider Garden Stork).

The project is driven by strong love (Bear Heart Rider), but it mirrors a man’s inertia (Stork, Man, Coffin).

Strong ideas are in flux (Bear Star Stork), but they get interrupted (Rider Mice Coffin).

Now, if we stick closely to the question: ‘should I finalize my textbook in my summer vacation,’ it is clear that the cards indicate that one shouldn’t. Good idea, but too much hassle. However, since the question consists of a modal variation, one could argue that there’s room for reconsidering. Especially as the surprise card is a very positive card. The Sun is one of the best cards in Lenormand, and one of my favorites. So, ‘should I,’ could turn from ‘you mightn’t’ into ‘you could’.

But let us make a final point here. It is my philosophy that whatever line of trios we read, the question must always be in the back of our heads. Or else we depart from staying focused on the question, with the consequence of seeing all sorts of things all over the place.

We can quickly also get lost in agency and start asking confusingly, upon seeing person cards or court cards on the playing-card insets, ‘who are all these people, who does what to whom and why, and what do they all have to do with my question?’

This circus is bound to bewilder everybody. In this spread we could easily talk about 6 people being involved in this project: A man in love, but who is also sick (Man), a rich ancestor (Bear), a mediumistic mother (Stork), a depressed man (Rider), a lovely young woman (Flowers) and a restless young man (Whip).

Not to mention that judging by their position in the spread, we can also talk about different character traits, and physical attributes: a dying old man (Bear Coffin modified by the Tree), a tall man (Rider Tree), a man in black (Man Coffin), an eager lover (Heart Whip), and so on. So the question must lead the cards, and not the other way around.

In order to eliminate the potential confusion, we can also read straight, or in line, after the mechanics imposed by the method of reading the council of 13, and perhaps see to what extent the meanings derived from the reading of each cluster is either validated by this additional reading, or extended.

For instance we can say that the idea for this project flows towards the public solidly but exhaustively (Star Fish Garden Tree Mouse). For a more nuanced reading we might advance the notion that insofar as this idea is so great, it will not only take nerves to realize it, but will also turn out to be exhaustive, as in completely comprehensive. Done. In a way that no one else has done it before.

This is a nice aspiration, to produce something unheard of (Star Flowers Mouse). The Coffin nearby might support this as well, as it could simply mean, in this additional context, the laying down of new roots, the incubation of knowledge. Done.

Vertically we can say the following: The heart gets a beating in the public but all for the better. At least one man will appreciate the effort (Heart Whip Garden Flowers Man). But now to the main point here.

Although I could have turned this around when reading vertically the principal cluster of the inner cross, and say that the project will encounter an aggressive reception, but one that is also welcome, I didn’t.  And why didn’t I say that? Simply because that would have shifted my focus from the sitter’s question, on whether she should finalize her textbook in her summer vacation or not, to saying something vague about the potential reception of a book that’s not even published yet.

The question was not about how many positive and how many negative reviews there’ll be on amazon. Nor was the sitter’s question about her concern with having to please the crowds – although we might obviously make that inference: fling the book to the public (Whip Garden), and then wait and see what happens (Flowers).

Thus, we can see that although the cards can give us plenty of information that answers the question unambiguously, they can also offer unsolicited information. The art is to wade through it all and gather knowledge as a result of processing the information we get, rather than screaming: ‘information, how wonderful,’ and then getting ahead of ourselves naively.

So the answer to this question is: you should not waste your summer vacation on things that are not even that important (Star Mouse can actually mean exactly that), but rather enjoy the sun (nice addition here from the surprise card, which, however, can also mean that the sitter should bake her book some more before getting it out of the oven).

A quick look at the playing-card insets (I won’t venture into a full reading here, although that would be very interesting) also tells us this: The ways (6♥) of controlling money (K♦) for the sake of a potentially slanderous educational community (8♠) leads to emotional trouble (7♥) and then more trouble (7♣).

The merry go-round (J♥) playing with her eager peers (J♣) leads to a troubled community (8♠) that is stirred up especially by an ill-disposed woman (A♠) who hates the sitter’s house (A♥).

In other words, enjoy your vacation, and don’t worry about jealous people or the money.

Now, let us turn to a quick reading of the method of 13. The pattern is as follows in the diagram, and the reading is based on just 3 cards.

As a follow up to the question above, the sitter wanted to know what else she could do that was not a waste of time, or investing energy into a project that’s not yet ready for the current public. I laid down 13 cards in an oval setting, face down, and then I asked her to pick one. 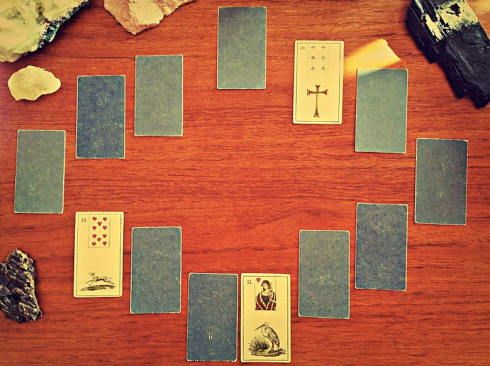 The sitter should focus on leaving her grievances behind (Cross) and move (Stork) towards appreciating a friend (Dog).

For a strengthening of this message, one can turn the cards mirroring the revealed cards, plus, in this case, the card that features in the ‘couple’ at the bottom. 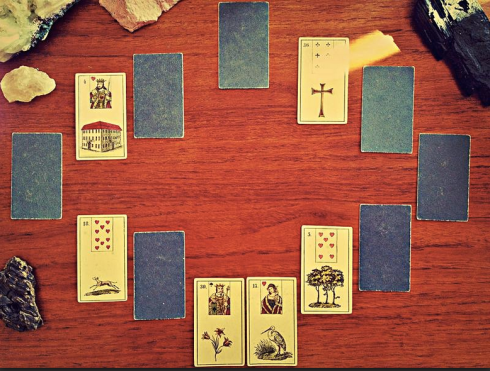 The sense of appreciating a friend is enforced here by the presence of the Lily next to the Stork. In addition, as some Lenormand readers prefer to see this card associated primarily will sex, we could say that this appreciation may manifest itself as shagging the friend. Whatever works.

The Tree below the Cross denotes a renewal of faith and spiritual and physical recovery. In other words, the sitter should have a completely tranquil vacation and not stress with work at all. The vacation should be ‘like home’ (House) but enjoyed in harmony (Lily) with nature (Tree) and the company of animals (Stork Dog).

The insets give us this:

The working path should follow the Queen of Hearts, as she knows everything about complete enjoyment (6♣ Q♥ 10♥).

So, the council of 13 cards can be used to utmost satisfaction to answer a simple yes/no question, without putting us on a track of losing ourselves to banal observations or to making poor and uninformed judgments.

Although most Lenormand readers don’t want to bother with reading the playing-card insets, as most don’t think that they have anything to do with the images or the standard meanings of the Lenormand cards, I’m of the opinion that they CAN be used to great effect. All one needs is the usual commonsense, a simple method based on logical inference, and a little bit of clever skill (see an example here).

Have a good gemot.