Some cartomantic folks like to use cards for poetic purposes. Such as finding inspiration for writing, or finding inspiration for how to live more poetically. We have played before in the context of Taroflexions where we have created exquisite corpses, or followed a visual idea through another set of images. Here is a recent take on a poem that started as an exchange between Fortune Buchholz and Enrique Enriquez and ended as a collaboration between the 2 plus myself, Bent Sørensen, and Robert Place.

“Most people are not something one thinks about.” ⁓ Vreeland

You cannot be denied your tattered trifles of desire

From a stern appeal to caustic prudence or vampiric duty.

You cannot be denied your tattered trifles of desire

As propriety or worse, froideur, could cause us to forget

Or serves to forge in us sad passion’s sharpest debt.

As propriety or worse, froideur, could cause us to forget

That moral need to exalt each failing human sign

Or serves to forge in us sad passion’s sharpest debt,

Yet works in us a music to accept what fear outshines.

That moral need to exalt each failing human sign

From a stern appeal to caustic prudence or vampiric duty

Yet works in us a music to accept what fear outshines:

She shared it with Enrique, but didn’t tell him what tarot she used. Enrique being Enrique, of course, saw images from the Tarot de Marseille in the lines of the poems. 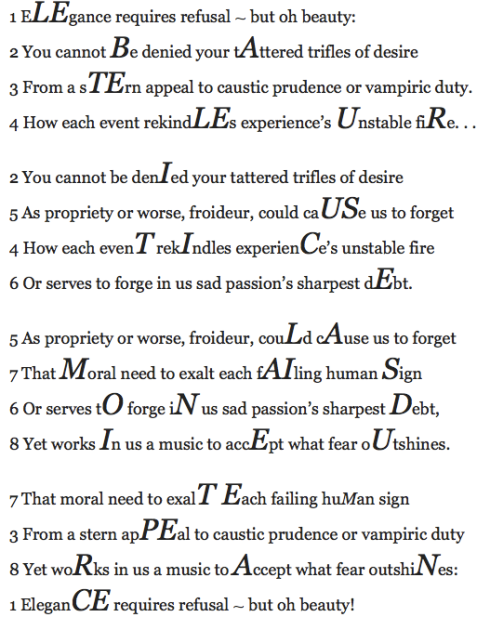 But Fortune wanted another opinion. She thus turned to Bent Sørensen, who started speculating on what deck Fortune used, while, however, also looking at Enrique’s take on the poem. Bent being Bent decided that there was ample evidence in the text of a dark matter.

Here’s how he describes what he did, in a mail he sent to Fortune:

First I read the poem, and noted its negative energies, followed by a struggle to transcend and achieve a new form of balance (forgive the crude precis!). For some reason this made me think of Crowley. I therefore chose the Thoth deck to play with.

Liking restrictions on my play, I decided to not use majors or court cards, only pips from the four suits. Some were dictated to me by AC’s labels, when they repeated words/concepts from your poem, some were in need of some looser interpretation/synonymity/analogy-thingy thinking…

Then I thought of what you said about each line having a card as its significator. I would thus need 8 cards. However, most lines had some form of duality in them, and of course each line occurs twice in the poem. Hence, I doubled down and selected 16 cards…

To visualize I then laid out the cards in pairs, each pair representing a line in the poem. The first photo shows this lay-out in two columns: line 1-4 in the left hand column of pairs; 5-8 in the right-hand one…

Then I re-arranged the cards in the Pantoum scheme, creating the 4 stanzas of each 4 lines, with the requisite scheme of repetitions, now dividing the original pairs, since I needed each line twice. The second photo shows the ensuing ‘spread’ – a Crowley version of your poem.

PS: I think you will join me in a slightly chilled moment of amusement at the fact that the first stanza begins 6-6-6…. 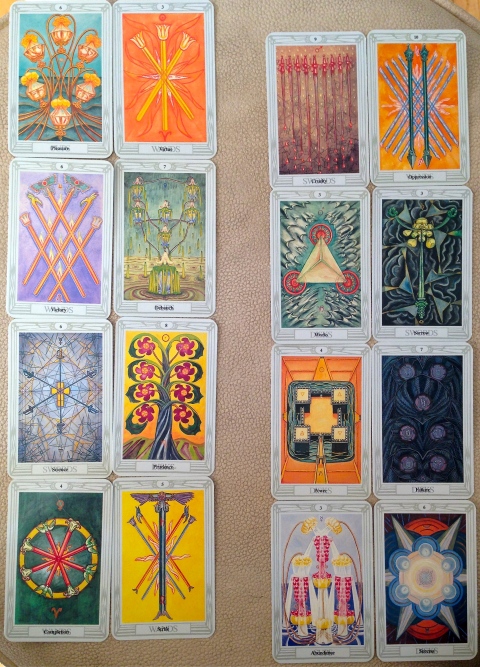 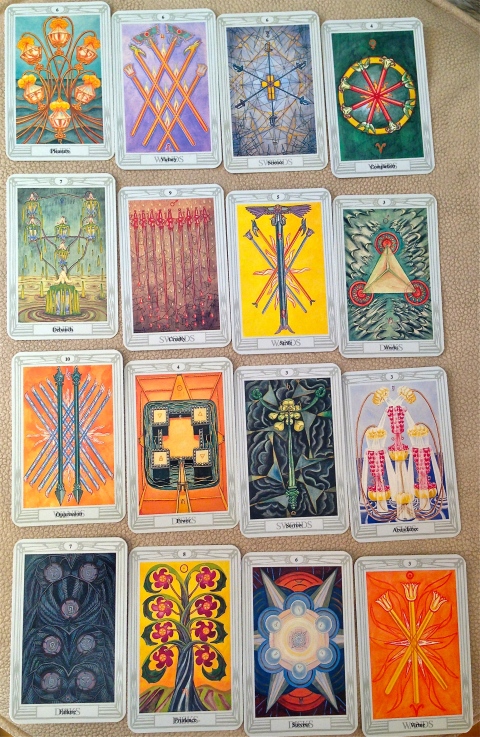 Now, while Bent was at it, I couldn’t help getting interested in all the dark dancing, and decided that I should give a reading of Bent’s Thoth take on Maura’s pantoum. I wrote a line for each of Bent’s 4 rows.

Behind the curtain Polonius gets the scepter. Oh, to rule on an oil platform.

First the iron bridge, then the brick bridge over the moat. And then the tightrope. What’s Hamlet doing in the trapeze?

There’s dark life under the safety net. The bluebells ring: ‘Hamlet, come on man, nothing can go wrong on a trampoline.‘ Hamlet pulls a salto mortale, and ends up in the wheel after 666.

Fortune liked what she saw, and finally decided to disclose the source of her inspiration, The Vampire Tarot made by Robert Place. These are the 8 cards she had used, one for each individual line for her pantoum. 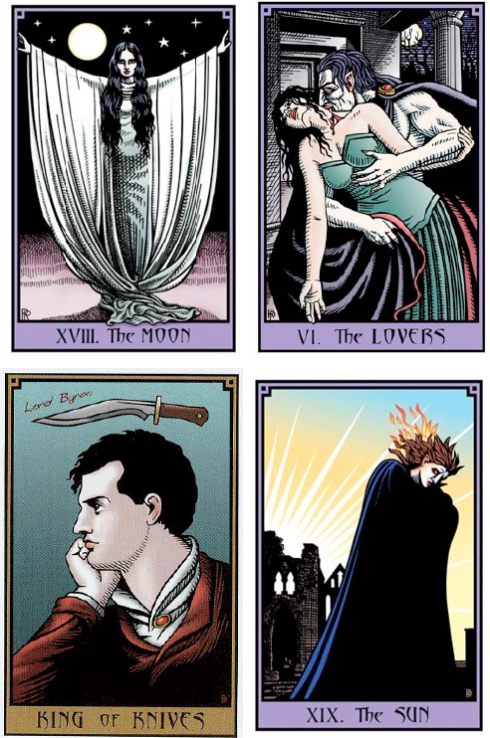 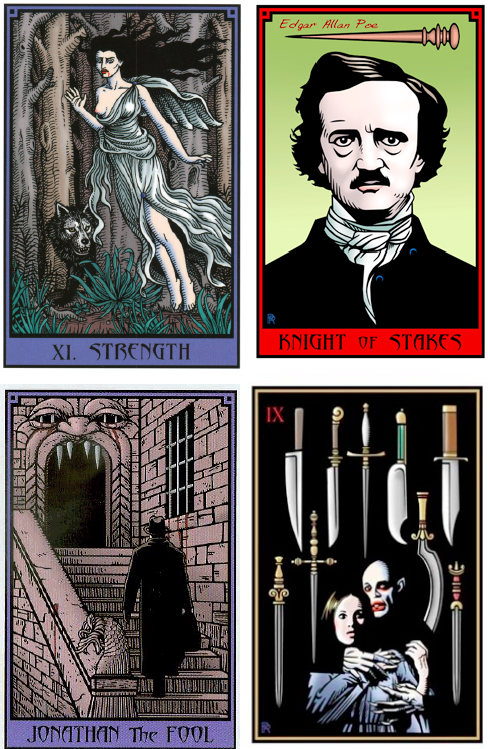 But the game continued, now with Robert on board. He closed the sequence with a return to his own images, a new set inspired by the above exchanges, and a reading of these images.

Going back to the Vampire Tarot and finding the equivalent trumps to the Marseilles trumps that Enrique found in the poem, I came up with this reading. Reading like a page from the top left:

The Vampire has many powers that would seem to make him invincible. He is as strong as ten men, he can appear and vanish into a mist, and can control the forces of nature.  But, because of his villainy, he is vulnerable.  Justice will bring forth champions to defeat him. He is not even safe in his stronghold because the champions of Justice will seek him out and exploit his weaknesses.  His only salvation is to temper his lusts and avoid the anger of Justice. 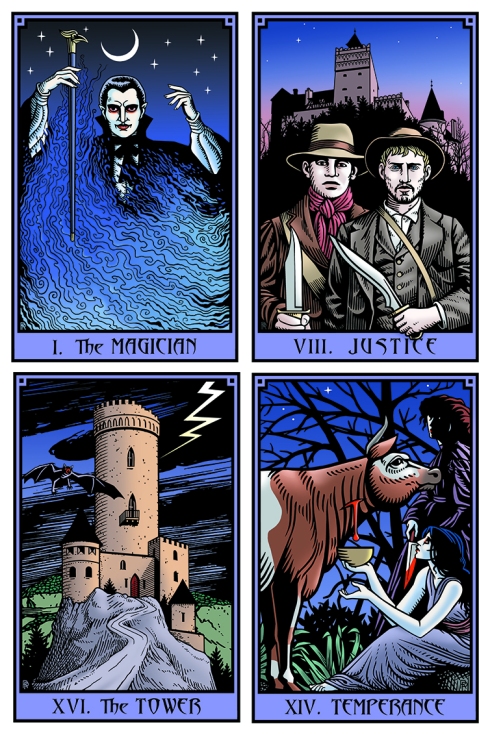 We share thus this wonderful collaborative effort, but not without making a final point: tarot is a game. The game of thinking and pleasure, inspiration and generosity. Enjoy!

Note on the decks:

For words of power, a touch of magic, and info on what divination activities I run, join my newsletter for free.