As most cartomancers know, Etteilla (Jean-Baptiste Alliette, 1738 – 1791) is credited with having contributed to separating fortunetelling with playing cards from divination with tarot.

Now, why did he do that, some still ask? My guess is that he wanted a place with the high-standing esoteric masons, and he needed something that would convince them of his occult inclinations.

Then, as always, there’s the money. All things Egyptian were in vogue at the time, so, why not conflate reading cards, based on a logical system, with some immortality of the soul? All very good. This is a fairly well documented area in the study of the history of tarot and fortunetelling with playing cards, so I won’t make too much fuss about it.

Now, what I haven’t come across is the following idea: Etteilla got tired of counting – French cartomancy can be pretty awful at that – and decided instead to replace counting with mapping.

Following the esoteric axiom, as above so below, all he needed was a new speculative system that could be mapped onto all things between heaven and earth. Thoth was moving in his grave, and so were the celestial bodies. Fascinating stuff. A new system was born, and it was called esoteric tarot.

Here I would argue that what Etteilla did, and that almost marked a no going back to traditional fortunetelling, was to replace a linear way of reading, based on counting, lines, rows and grids, with creating spreads. The idea of locking a card in a certain position became very popular and we need not look any further than the Anglo-American world where this culminated.

However, there is now a new revival of old cartomantic traditions, and from what I’ve seen, the greatest challenge that readers face in crossing over, so to speak, from tarot to fortunetelling is comprehending that one can read cards without there being a spread for them. T

his is not to say that French cartomancy is devoid of ‘spreads’ – a grand tableau is a spread with all the cards on the table, and so is a horse shoe or a fan of 21 cards. My point is that when Etteilla ditched his playing cards and created his own tarots, he anticipated the future by going to the past.

I’d venture to argue that what he brought to his own deck, the Grand Etteilla, is a method of reading cards in trios, rather than by pairing and mirroring, or by counting cards from the end of a line towards the center. He never said this though.

Quite the contrary: he invented some rather complicated schemes, but the way in which he arrived at a conclusion was still by sticking to the old tradition of fortunetelling that goes back to the time before the French got snobbish.

My suspicion is also that he employed the rather simple method of reading the tarot de Marseille, which is based on following the way in which a rhyme scheme is built up so that it creates correspondences between the images.

Here, I can refer to the work of Enrique Enriquez, who has refashioned the method of reading the tarot de Marseille in a most original manner. So, my guess is that Etteilla went esoteric, further ‘unveiling’ the book of Thoth after his predecessor, Antoine Court de Gébelin, but what he kept a secret was the fact that he still preferred the commonsense of traditional fortunetelling.

Given this situation, along my curiosity about where the current race for going back to tradition will get us – but what tradition, that is the question – today I felt like asking my Grand Etteilla cards the following:

To what extent are we going back to earlier forms of fortunetelling, or the form that precedes all the fussing and bussing?

For this I chose an Etteilla-inspired spread called the inverted pyramid. I’m curious about the focus in this spread, with the top downwards emphasizing a certain gravitas.

Seen from an esoteric point of view, the inverted pyramid may be a representation of the Rosicrucian motto V.I.T.R.I.O.L. (Visita Interiorem Terrae Rectificandoque / Invenies Occultum Lapidem [Visit the interior of the earth and you will find the secret stone]).

Pragmatically, I want to know how we get grounded and where exactly.

But I’m not going to read this spread according to pairing the first and last card in the first line, nor according to how meaning is assigned to each card, mostly pertaining to the ‘he thinks, I think’ situation.

I’m going to go about reading this in the good old-fashioned way of reading the cards in a set of threes, following this scheme:

The first three cards tell us about where I come from with my question.

The next three cards in the same line tell us something about where we are heading.

The three cards in the second line tell us about what’s at stake. The card in the middle is central to the issue.

The last three cards are the outcome.

The King and Queen of Coins are in conflict. This conflict relates to their ambitions regarding monetary matters (6 coins below 2 swords).

We’re moving towards negotiating an emotional encounter, but this brings tears to the eyes (the reversed King of Cups below 9 swords is unrelenting).

We hit a constrained Etteilla. We are not going back to the time before him, as the man is firmly established in history (quite literally: L’homme en place).

There is study at the core of reading cards, as indicated by the central card, the Marseille Star. And we learn that while we lose some and gain some (5 swords + 7 coins), we nail it (reversed As of Batons) even in the face of rigid goals (6 coins + reversed King of Cups). 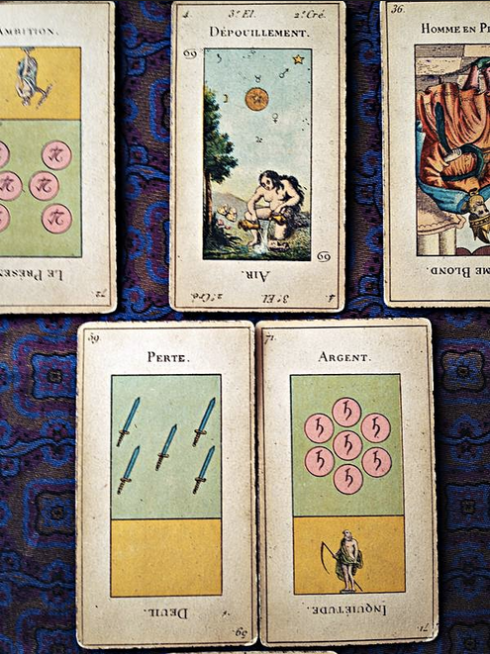 In the context of my question, I see no other conclusion than the following: wherever it is that we’re heading, it is not going back. Etteilla nailed a nerve.

The nerve that makes people think that spreads are still preferable to counting and math. Or that cartomancy that uses my preferred simple rule of three, color progression and number progression is boring.

I guess we’ll have to see what ‘traditional’, and ‘old-ways’ cartomancy will consequently mean in the future.

For a reading with Petite Etteilla, read my post here.

Stay in the loop. Join The Art of Reading. Get a gift: Read Like the Devil: A Crash Course.