‘Far and near is a method,’ people discovering the Lenormand cards want to say, implying thereby that by simply assessing the distance between the significator cards in a line of 5 to 7 cards, the square of 9, or the grand tableau, your arrive either at discarding a potential interpretative notion, or at incorporating it as significant. Fair enough, but if someones asks me, I’d say that assessing distance is not part of a method, but rather common sense. It simply makes sense to infer that if the Heart is not near the Woman in a layout, then the reading is not about her passion. But this inference only makes sense if we read the cards without a question. As soon as we have a question on the table, then all the configurations we see must simply relate to that, to the question, not the method. This point is in fact one I hammer on whenever I have to square off against the people with a cause, read that as the self-appointed traditionalists.

In my fortunetelling practice I distinguish very clearly between method and common sense. Method relates to asking people to follow certain steps, for instance in the 9-card carré, you look at the center card first, or consider the first card down as representing a theme, then you consider the corner cards, the middle cards in the diamond shape, the rows and the columns, X’ing the tableau, and create sentences based on modifier cards, an intersecting line here and there, or a mirroring pair. Method is all that which someone invents for the sake of simplifying a complex issue, for the sake of adding nuance to the already simple, or for the sake of sheer entertainment as it’s fun to think in terms of how rules can apply to conventions or how a formal system can constrain or free a mode of thinking.

Common sense, on the other hand, is all that which we can all agree on without a method. It’s the universal recognition that something is just so. The question of ‘far and near’ pertains to common sense, not method. Whether the cards change meaning or not – all according to their position in relation to the significator card – means absolutely nothing, if what we can say about this change in meaning will not relate specifically to the question. For instance, saying that something stolen will not be retrieved if the Mouse card is far from the significator means diddly-squat, if this statement turns out to otherwise contradict the overall message that we get from the other cards on the table.

One can, of course, say that when some cards are far from the significator they have less impact, but only if one is looking for such information, that is to say, information that says something about impact. My point is that passing judgment on the significance of distance between the cards in a reading should not be pointed to without solid motivation, or talked about simply because ‘it’s method.’ What I say is this: if it is helpful to say that because the Coffin is far from the significator, what we are looking at is ‘good news,’ then say it. If not, then don’t say it. What’s the point of saying to a sitter that it’s good news that the Coffin is not near their significator when all the sitter wants to know about is how they can improve their method acting? What would this ‘good news’ refer to? Their health? The danger of acting as if in a Vampire film when the main story line is about baseball? Or the general state of affairs dictated by pride devoid of premise: ‘I’m saying it like it is?’

Common sense observations are not method; they are just common sense observations. Systematically applying observing the rule of far/near without consideration of relevance is just dogma, and it has little to do with the reading of cards as an investigation into relations. The rule of thumb is that if something is far, it has little impact, and if something is close it has more impact. That’s common sense. Let it stay that way, and forget about what the ‘German School’ advocates claim is ‘theirs’ and what the French claim is not ‘theirs’ but since it’s there, it’s more interesting. Most of the time ‘schools’ are nothing but culture wars.

Whenever I’m confronted with lamentations and expressions of fear and inadequacy, I simply ask people to just look at the damn cards, and start with that. Reading cards is not difficult if you apply common sense to whatever system of divination you use. The idea is not to learn a method so that you can forget all about common sense. The idea is to think of method as something that serves your reading, not as something that you consider the ultimate guide. There is no such thing as the ultimate guide, as the method dictating how ‘this is that.’ Sometimes ‘this is this.’ Something is far, no impact, something is close, some impact. This is very simple, and pretty much all there is to it.

In terms of the Lenormand deck having ‘invented’ the ‘far and near’ approach, let us not even go there. But I want to let this aberration stand here, as it’s one that populates many a so-called ‘learning groups,’ in the hope that the reader of this might start hearing the ridiculous in it. When that is said, anyone with rudimentary knowledge of astrology knows where this idea comes from, and that it goes all the way back to the Chaldean astronomers who calculated the significance of planetary alignments according to essential dignities and speed of the planets. Their methods were all about the ‘far and near’ notion. Why? Because looking at the distance between the astronomical bodies can have an impact on your harvesting, for instance, as it makes a difference to know when the Moon is conjoined the Sun and when the Moon is in opposition. The same applies to the other planets.

To illustrate just how serious others have thought of this far/near question in terms of its belonging to the category of method, here’s a short reading of a grand tableau with a rare fortunetelling deck in my possession from the 20s, a Lenormand variant.

What I like about this deck is its take on distance as depicted on the cards in the form of a short narrative. But not all cards have such indications.

And why not, one may ask, if this is such an important part of the old traditional Lenormand lore?

Here I would venture to say that it’s simply because the deck follows that part of tradition that says: Use your common sense.

When it’s called for observations of the far and near kind, then say it, if not, don’t force it through.

Here is my question, to stick to my own tradition of always insisting on one:

To what extent is it useful to downgrade common sense to method? 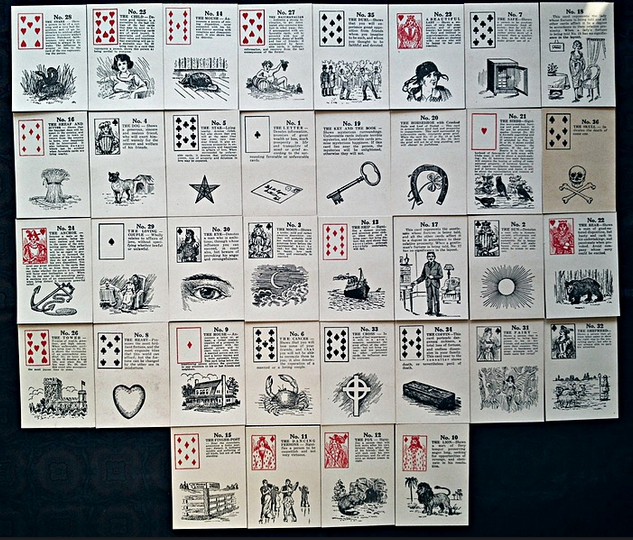 The significator card in this deck is nr. 18, the Woman (note that the significators here don’t have a playing-card inset). For common sense I picked the heart. 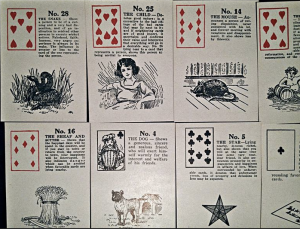 The first card in the tableau, the Snake discloses what’s at stake. I’m forewarned. Snake mirrors Woman. Woman mirrors Shepard. Nice. Follow the tradition of the simple folk. Leave common sense to nature. And be forewarned if common sense must pass through the Tower. Tower mirrors Snake. A nice wrap.

According to others insisting on the far and near aspect as part of method, the fact that the Heart is far from the Woman can’t be good at all.

‘Oh, wow, I wonder if I should get distressed now. And how will this enter in the other, rather neat, relation of the corner cards? Oh, I’m getting confused now.’

I use sarcasm here for purely instructional purpose, as I simply wish to see that more beginners start thinking for themselves, before accepting every piece of nonsense at face value, just because it’s presented as ‘method’. 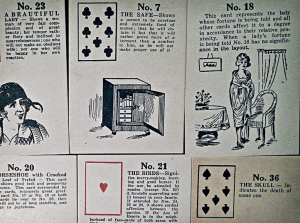 I liked my tableau today and the weird cards I’ve got. It certainly tells me that upgrading common sense to method is deadly and it goes nowhere. The Skull below the Woman in the top corner going nowhere can be taken quite literally.

Keeping common sense close to the heart means keeping it free of imposed rules that have little to do with the pleasure of reading cards. The Woman intersects with the Heart in the Child, which suggests that one should not be preoccupied with institutionalized conventions.

In many of my posts I advise readers of cards to not forget to dance with the cards. Rigidity only creates monsters.

Who wants to hear a mechanical, standard reading?

The last four cards in the tableau are quite telling in this connection: leave the many roads behind (Finger-post) and follow the sign: you are going dancing (Dancing) with the cunning (Fox) and the strong (Lion). 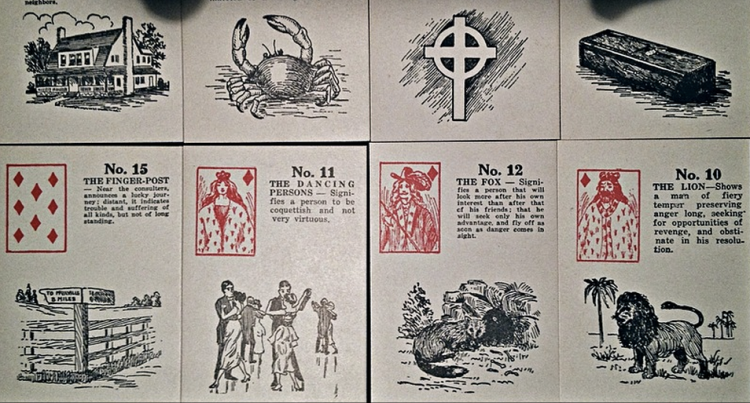 A deck not presented here, the Gypsy Witch Fortunetelling (1904), is even more consistent with the far and near instructions. Some might want to check it out and compare.

Stay in the loop for cartomantic courses at Aradia Academy.

3 thoughts on “FAR AND NEAR IN LENORMAND”