Sometimes I get the strangest comments and questions to some of my writings here on Taroflexions. The day before yesterday someone I don’t know posted the following, all in block letters, in connection with a spread I invented on questions about Entitlement to be used with playing-cards:

HI CAMELIA I THINK YOU ARE A VERY GOOD READER! AND YOU ARE PRETTY, WHAT IS THE COMBO FOR TV?

The way in which I ended up replying made me think of writing something about location in reading with the Lenormand cards.

In other words, tradition does nothing for me if it doesn’t allow me to use my own head, thank you very much.

To give you an idea, and before I plunge into some Lenormand examples, I reproduce here my reply to David Cunningham on what I think of appliances:

Thanks David. I don’t do ‘combos’ outside of the context of a question, so I discourage any reader to do ‘combos’ for the sake doing ‘combos’. But let’s say you asked this: ‘where did I put my keys?’ If I saw this trio: 3♠, 10♣, 6♦, I would say this: ‘you can find them on top of your TV.’ Now the reasoning: 3♠ indicates a loss, something decreases, 10♣ can indicate appliances, many wires, plus here, the top of something. The club also lets us know that we’re dealing with air circulation. What comes through the air? 6♦. This can indicate vision at a distance, the 6 is a path. Of diamond, a path of the intellect. So, visual ideas that come from a distance and go through wires can easily be located in your TV box. Hence, you may find what you’ve lost on top of it. Good luck.

Now, where do we start, if we want to look at the Lenormand cards in a similar way to get a sense of location?

In figuring out what cards might signify which location – and today I mean countries not a garage – we have three options:

1) Either to go with the so-called ‘traditional’ way, the way of our Gypsy or Jewish grandma, and thus deliver their invented phrases for certain combinations because they are the ‘authentic’ ones, or

2) We can try to see if we can freshen up grandma’s logic with allowing for all sort of things to happen in our own head, all according to our own context, of course.

3) We might actually  ask the cards to tell us how they represent a country.

Just for fun today I laid out three cards and said:

Please, show me Denmark, the country I’ve been living in for more than half of my adult life.

First off, I see that the cards themselves insist on combining tradition with what I know about Denmark as a matter of fact. Very nice indeed. So, thank you to my favorite Lenormand deck, the Leipzig Lenormand. 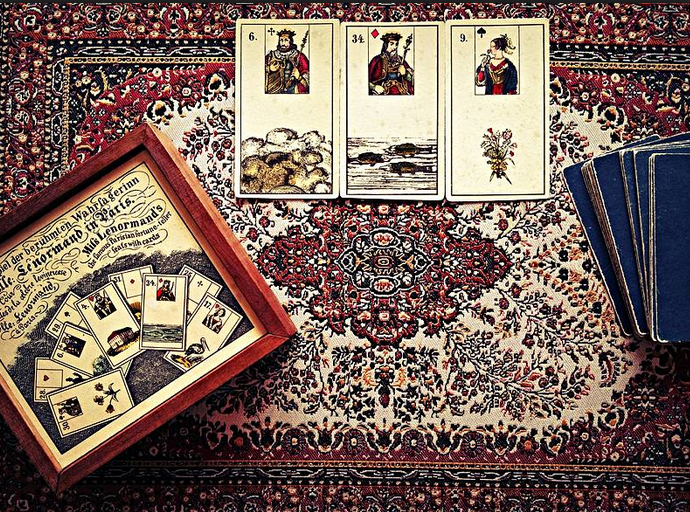 Denmark is cloudy, lots of water around it, and if we take the way in which the Danish government pushes the branding of the tourist slogan, now the internationally renowned: ‘Wonderful Copenhagen’, I would have to say that the cards here tell me also that they are up to date.

The Flowers card indicates that something is lovely and specific to the place as we know it now and thus distinct from other Scandinavian countries.

Traditionally, the Scandinavian countries have been represented by playing-cards and Lenormand cards alike through this combination: 10 of Spades + 8 of Clubs + Ace of Spades, the insets for Ship+Mountain+Lily.

So, to get to Scandinavia the cards tell me this: You can sail no further north than the 10 of Spades. The land peaks in the air as high up as you can imagine the 8 of Clubs, and it is as clean and wintery as a cutting Ace of Spades.

But now also to the nuances:

How would we distinguish between the Nordic countries?

As someone who spends all her vacations in Norway, I know that the flatness of Denmark has very little to do with any mountain.

And there are no forests like in Sweden either, so the 8 of Clubs/Mountain card is of no use to me here. A good thing that the cards suggested by chance what I don’t need to make a mental effort about, namely to reason how we put two and two together, while, however, also allowing the cards to seize us.

I insist on this latter part, as I’m quite tired of having to hear about the literalness of the Lenormand cards as if interpretation is not what we are doing when reading cards in conjunction.

So, the cards today suggested images that come close to representing a country hemmed in by atmospheric pressure (Clouds) due to lots of surrounding water (Fish), but quite lovely at that (Flowers).

Consequently, here’s the updated logic behind seeing these cards representing Denmark rather than Norway.

Clouds as a means of saying something about the weather and atmosphere: yes, quite overcast.

Clouds also as a means of ‘bordering’. Yes, I can see where this one comes from, namely from the way in which clouds act as a divider between good and not so good weather.

Clouds indicating pressure, flattening everything out. Yep, Denmark is a flat as a pancake, the beaten path of the King of Clubs.

Fish telling us that we are close to water.

Fish swimming in a cloud of fog over the sea and pollen from the many Danish flower fields.

Fish indicating a merchant’s place. The King of Diamonds rulling over the city of København, which literally means the Merchant’s Harbour.

Flowers indicating an invitation. Copenhagen has just been called globally: “The best city to live in.” All ye who want to be seduced by the Queen of Spades, come to this wintry land.

The point is that we can make logical inferences about what locations the cards indicate by looking at both the image on the card and its cartomantic value represented by the playing-card insets.

I also make a case for looking at the function of the image on every card.

The Anchor can indicate harbors, The Mountain a mountainous area, the Lily a cold place, the Sun a hot place or a place in the East, the Tower capital cities, the Birds a place nearby, and so on.

Here are a few of my favorite traditional representations, and by tradition I mean the cunning-folk ways of understanding a web of relations, ways that are always derived from commonsense.

Although, let us also remember that this ‘tradition’ goes back to Etteilla’s time and the rise of fortunetelling manuals. What we call classical fortunetelling is in fact pretty much Etteilla based.

One of these days, I’m waiting for someone who can’t make up his mind as to where to go on vacation and get a chance to say, ‘go to Mongolia,’ if this combination, Rider+Sun+Whip, was on my table (my own concoction).

Go travelling, and don’t forget your horse at home.