For as long as I remember I’ve been interested in various forms of touching. From imaginary touching to physical touching there’s a whole range of cognitive emotions that one can draw on. Whether imagined or not, touching is a participatory rather than an individual move.

When we say, ‘I’m touched,’ about something, we first get the visuals in place and then the abstractness of the situation. Touching is therefore quite magical. For instance, there is a powerful relation between asking people to imagine things and physically touching them.

Touch relating to visualization is the most complicit of acts. When people allow you to touch them in that way, they strip naked for you. Yet their nakedness only serves to give way to a translucent light right into their souls.

Not long ago I sat in the Shakespeare pub in Birmingham with my sister. I was visiting the university to teach some classes in literary theory and creative writing. As for my sister, she just came along to check out the spiritual state of England.

We were tired after a long day of teaching and shopping that included a spree at an esoteric place called Zen and where we bought new Tarot decks and a few interestingly shaped stones. As we sat there enjoying some pale ales and looking through our purchases, an elderly couple next to our table was looking our way quite intently.

‘Are those Tarot cards?’ the man asked, and I said, ‘Yes’. ‘Oh, my God,’ he said. ‘How nice, but those things mess with your head.’ ‘Why do you think so?’ I asked, and he said: ‘Oh, I just know, these cards make you think very hard. I never want to look at Tarot cards.’

Then he delivered unsolicited information, ‘But I talk to ghosts.’ Quite. ‘That sounds interesting,’ I said. ‘So, what do they tell you?’ ‘Oh, many things,’ he said. ‘About life and all. But there’s always something that I don’t understand,’ he also said. ‘We can use the cards to ask about it,’ I said, and then I made a move towards his table.

The man’s wife was making space for me unconsciously. ‘Please, don’t touch me,’ he said, almost jumping in the air. ‘I won’t’, I said. ‘Oh, I’m so afraid of this,’ he said, and quickly got on his feet heading for the restrooms. His wife turned to me and said: ‘You can touch me.’

I did it. First with the cards. But I gave her a touching reading on her husband’s behalf. As he was absent from the scene for a while, I took a seat by their table and said: ‘Let’s see why your husband’ – ‘ex-husband,’ she then corrected me – talks to ghosts’. Three cards fell on the table: Le Pendv, Jvstice, La Rove de Fortvne (The Hanged Man, Justice, The Wheel of Fortune). 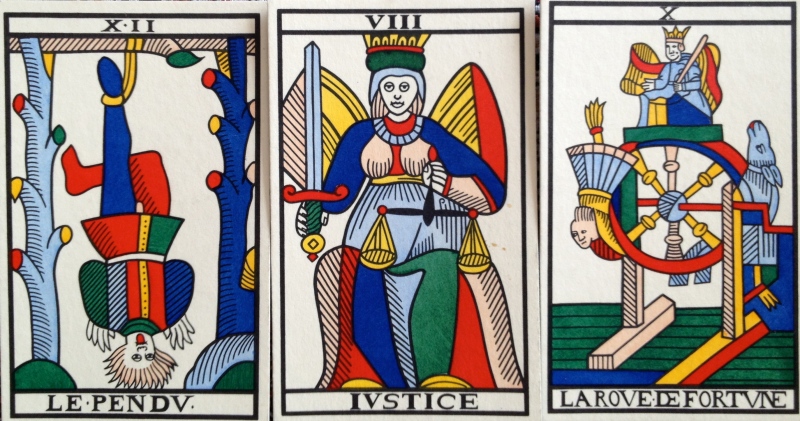 I said to her, ‘He’s chasing some truth at a standstill that he’d like to get proof of, but it hasn’t happened yet.’ Then the touch. The woman took both my hands in her hands, and said: ‘You know, this man thinks he has a twin. During the war he remembers that he was placed in a safe house with another kid, yet when he returned to his family there was only one of them left. Ever since then he’s been trying to find out whether he has a brother. He even went to Canada on a trail, but no luck.’

Then, as we saw the man returning to the table, she quickly let go of my hands and said, ‘Please don’t tell him I told you this.’ I said: ‘I won’t.’

As I had to leave myself, I parted with them, yet wondering: Does the man have a twin? Back at the hotel, I went out for dinner with a friend, and told him the story. As he is also into all kind of texts – he teaches literature and, as it turned out, he is very good with the Marseille Tarot – he almost yelled at me:

‘What do you mean you parted with them? You can’t do that to people. We need to know what happened. Does he or does he not have a twin?’

He was getting hysterical, so I said: ‘Listen, if you’re so worked up, you can cut the deck and ask the question, and we’ll see what the cards say.’ Said and done. Three cards fell on the table: Le Pape, Lermite, Le Fov (The Pope, The Hermite, the Fool).

Before I said anything, he got up and shouted ecstatically: ‘There’s no twin, there’s no twin. Look at those cards. He thinks there are two of them, but it’s a foolish thought. He’s alone. And look at the cat eating his balls. This man has only one testicle. Men with only one testicle are often chased by the chimera of an Other.’

Needless to say, I didn’t have to add anything. My friend then insisted that I went back to the pub, try to find the couple, and ask the wife to corroborate his thesis.

I ended up suggesting that he did that, get himself a pack of cards, and start searching. We ended this scenario with my friend insisting that I take the cards with me everywhere, to work, to pubs, to conferences, to classrooms, the restrooms, but that I shouldn’t read in the streets after 6 o’clock, as that is the time when ‘the nutters’ come out.

As he forgot to include both of us in that category of nutters and Tarot enthusiasts, I still feel haunted by the economy of storytelling and particularly touch.

Occasionally I retell this incident to friends, and I’m continuously touched by what they have to offer. The finest tarologist, Enrique Enriquez, (protagonist in the first feature film on Tarot, Tarology, accompanying his book Tarology), had this to say:

It is funny that a man would only let himself be touched by dead people. Touching is important. It is one more thing therapy took away from us (…) “Le Pendu, Justice, La Roue” = “fate judges the tRaitoR“. That man doesn’t talk to ghosts, but to his own Remorse.

Indeed. Remorse for having survived the war, who’s to say? 70 years of living with an invented story is quite something. And yet, I have to say that I was a bit jealous. The old man seemed more in touch with his imagination and his ‘real ghosts’, as he insisted, than the rest of the lot at the pub, some clearly tormented existences.

Had I stayed 10 more minutes, I would have touched him, in that special way that Gabriel Josipovici also talks about in his fine book Touch, the complicitous way, but then again, that may have spoiled the later magic. I took the gift that was given me at that moment, leaving myself like a ghost, and appreciating it for what it was. The man liked me and I liked him, and that was all I needed to know.

Encounters such as these are proof of the kind of poetic situations that the Tarot cards create. As Enrique also offered a reading of my friend’s reading of the old man’s cards, we ended up with spin-off narratives, alternating poetically between the world of logos and the world of mythos, and keeping the two in perfect balance and co-existence. Said Enrique:

The Father has two sons. We could also see the whole tableaux as if it where depicting your ghost-whisperer’s situation: a grown up man (Lermite) remembers a past when he had a brother (Le Pape), and goes through life (Le Fol) with such memory biting him in the ass. Or we could see the tableaux as a direct instruction (to Lermite): “snap out of it! Turn around and walk away. Ignore the pain of what you think you know”. To what I would suggest: “You deserve to live.” I wish all my taro logical encounters were like that one! Now, the amazing thing about such encounter is the SITUATION you created, where a series of memorable events occur around the tarot, while eliciting a poetic derailment of reality.

Indeed. Such situations are not only magical and astonishing, but above all, touching. They enable us to make creative leaps that expand our field of vision and our consciousness. The art of the Tarot is the art of participating in what it means to be honest beyond the cultural construction of clichés.

More of this? Check out my books in the divination series: Marseille Tarot: Towards the Art of Reading and The Oracle Travels Light: Principles of Magic with Cards

Stay in the loop. Join The Art of Reading. Get a gift: Read Like the Devil: A Crash Course.